Traveling to every corner of the United States, photographer Gabriele Galimberti captured proud gun owners and the American tradition to bear arms for a documentary project, titled “The Ameriguns.”

Galimberti is an award-winning Italian documentary photographer with numerous exhibitions, books, and projects under his belt. He also recently become a National Geographic photographer.

One of his latest projects, “The Ameriguns,” explores arms culture in the United States, which houses half of the privately owned, non-military purpose firearms in the world. The number of firearms even exceeds the number of the country’s population — 393 million firearms for 328 million people.

As Galimberti explains in his project, the cultural phenomenon of arms culture is deeply rooted in the “matter of tradition and constitutional guarantee.”

“It is the history of the Second Amendment, ratified in 1791 to reassure the inhabitants of the newly independent territories that their Federal Government could not, one day, abuse its authority over them.”

Fast forward 250 years later, and the Second Amendment is still an integral part of American life. This is the key theme — visualized through “what are seen as four fundamental American values: Family, Freedom, Passion, Style” — in Galimberti’s documentary project, now also published in print. 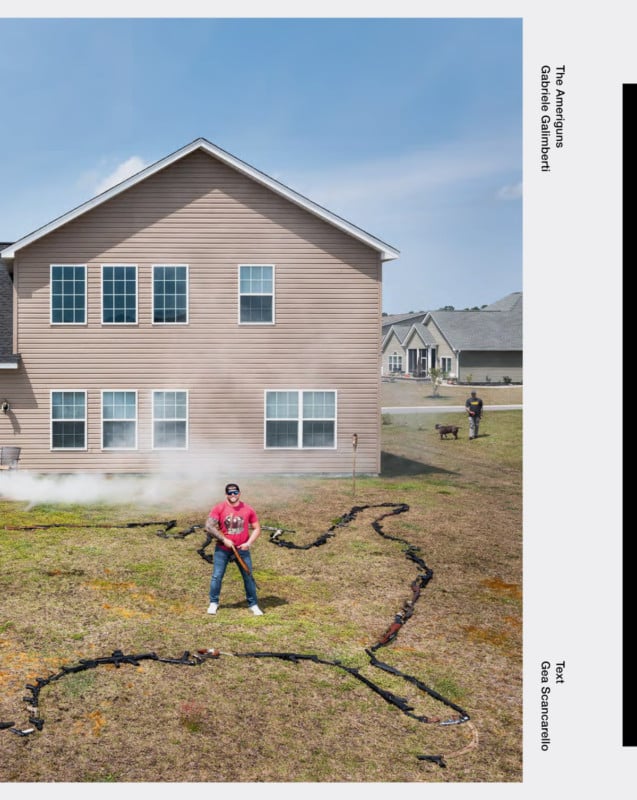 From Initial Curiosity to the Final Print Book

The project first arose when Galimberti followed his curiosity to find out who owns all of these firearms that make up the statistics. He walked into a gun shop in Kansas one day and started talking to some of the customers to find out more.

One of the patrons said he owns over 50 guns, and shortly after, Galimberti took a portrait of the proud gun owner and his entire arsenal. From there on, he visited numerous gun owners around the country and photographed them in their homes, neighborhoods, and alongside their firearms collections.

“These, often unsettling, portraits, along with the accompanying stories of the owners and their firearms which are based on interviews, provide an uncommon and unexpected insight into what today is really represented by the institution of the Second Amendment,” he describes his project.

His book also contains interviews with the participants and texts created by journalist and author Gea Scancarello. More of Galimberti’s work can be found on his website, with the book available in the Dewi Lewis Publishing online store.