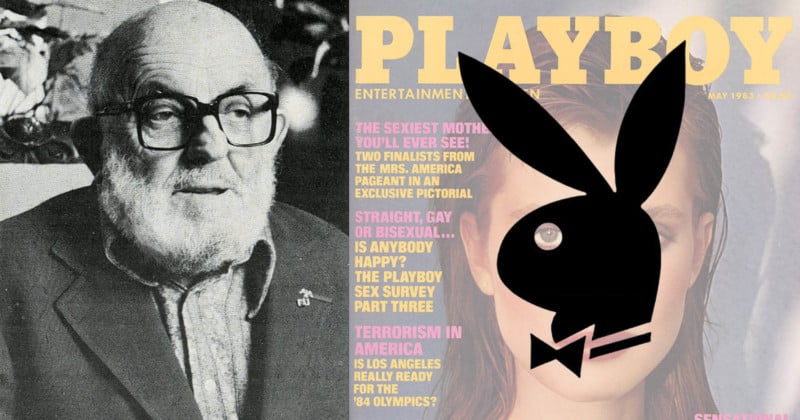 When I think of Ansel Adams, I think about beautiful landscapes, the zone system, and preserving the environment. I would have to say that Ansel Adams and Playboy Magazine are not words I would put into the same sentence, yet here we are.

Look, I’m no expert on Playboy. The extent of my experience is a single issue I kept tucked away in my bedroom as a teenager. I certainly wasn’t reading the interviews so perhaps there were stranger ones than this, but you cannot deny that it’s an odd pairing.

Let’s take a look at the May 1983 Playboy interview with Ansel Adams.

I first learned about this interview while reading Adams’s autobiography. Incredibly detailed, at about 400 pages, he talks about many aspects of his life, from mentors to celebrities, to back stories of his most famous photos. I have to admit, I’ve found Adams long-winded and wordy in his book The Camera, and the same applies here. Still a great read that I recommend though.

No Fan of President Ronald Reagan

In chapter 22, titled “Presidents and Politics,” Adams discusses his dislike for the US president at the time, Ronald Reagan.

“My experience with Ronald Reagan was negative from the start,” Adams writes. “As I write, he is in the fourth year of his first and, hopefully, last term of office in the White House. […]

“He has little or no personal interest in the environment or its protection. […]

“I have been outspoken in my opposition to Reagan and what he stands for and in my interview for Playboy magazine in their May 1983 issue, I pulled no punches. Playboy is a mixture of content that is unique and provocative. I debated very carefully their request for an interview, because the magazine as a whole is grossly sexist. However, its respected interviews touch varied facets of contemporary American life and reach an audience with whom I have rarely come in contact. David and Vicki Sheff were well prepared and conducted nineteen hours of taped dialogue over a two-week period.”

Oddly enough, it was done just weeks after a pacemaker operation.

The interview, when released, was quite extensive, with about 11 full pages of interview material, when condensed, and a 2-page spread of some of his more well-known photos. It was interlaced with advertisements for video monitors, booze, cigarettes, booze, boats, booze, condoms, and booze.

Much of it is what you’d expect from any interview. It touches on his first photos taken of Yosemite with a Kodak Brownie Box camera, his “revolutionary” zone system, serving on the board of the Sierra Club for 37 years, his crooked nose from the 1906 San Francisco earthquake, and of course, his views on photography, in great detail including his perhaps most famous quote, “the negative is like the composer’s score…the print is the performance.”

If you knew nothing about Ansel Adams going in, you’d have a solid understanding of who he was coming out.

His views of Reagan’s policies were also highlighted, which he called “the greatest threat to our environment ever.”

His attacks on Reagan’s Secretary of the Interior, James Watt had received so much attention that Watt was asked about the “thunderous denunciations of his policies by Ansel Adams.” Watt replied with a shrug, saying, “Ansel Adams never took a picture with a human being in his life.”

A friend of Adams, photographer James Alinder responded, “James Watt is no better historian of photography than Secretary of the Interior. Ansel Adams has not only made pictures of people, but his portraits form a major part of his photographic production.”

Watt also must have overlooked that Adams was the first photographer in history to create a presidential portrait, breaking from the traditional painting.

Perhaps the most notable comment concerning the sitting president of the time was when Adams mentions the budget cuts from universities. He holds up his martini glass, sarcastically thanks Mr. Reagan, and then, quite purposefully mutters under his breath he’d like to drown him in his drink. Followed by a tongue-in-cheek “Oh, my! That went on tape. To the FBI, if you’re listening: That was only a figure of speech. He wouldn’t fit into my martini.”

Opinions on Other Photographers and Techniques

While his political views contain strong opinions, it’s not that much of a surprise. What actually surprised me were Adams’s strong views on other photographers and photography techniques.

On the positive side, he enjoyed the works of Paul Strand, Alfred Stieglitz, and Dorothea Lange, to name a few, but his views on certain photographers and styles were pretty cut and dry.

When discussing the difference between a snapshot and art he said that “both William Henry Jackson and Edward Weston photographed the American West extensively. But in my opinion, only Weston’s photographs qualify as art. Jackson, for all his devotion on the subject, was recording the scene. Weston on the other hand, was actually creating something new.”

Another example is his involvement in Group F/64, which was “a strong reaction against the pictoralists, who were working their heads off to make a photograph look like anything but a photograph. In an attempt to be creative, they were retouching and diffusing the images. Hideous stuff!”

Of course, Playboy being a magazine with photography in it, couldn’t help but ask if Adams had ever photographed nudes.

“No, I just never got into the model business,” the photographer replied. “I guess it’s having a great respect for certain things that I believe are better expressed more abstractly.

“Take a Picasso sketch of a nude. To me, that’s much nuder than any nude in a photograph. There’s a beautiful, stylized line. In a photograph, you get a literal image and, for me, it doesn’t have the same effect. With nudes, stark reality isn’t as effective as an artist’s interpretation.”

Playboy follows up by saying, “But you choose to portray nature relatively realistically. Why not the human body?”

“Frankly, because I don’t think many bodies are very attractive when they are photographed. I’d rather keep my eyes shut. You try to make them look better in Playboy, but, in fact, they’re probably all greased up and touched up.”

Playboy simply says “That’s not an accurate statement” but asks him to continue.

Adams goes on to claim some of Edward Weston’s nudes look like dead bodies and that Playboy’s posing is contrived, but he concedes that there are some wonderful nude shots by Stieglitz, as well as Weston’s earlier works.

When asked about Helmut Newton, Adams simply answered “Terrible, don’t ask.” Interestingly enough, the cover of that May 1983 issue was photographed by Newton.

And when asked about Diane Arbus, Adams said “I think she was very sick. Her work bothers me terribly,” adding “She makes an effort to take an unpleasant vision and make it more unpleasant. It all just leaves a bad taste in my mouth.”

Playboy, not willing to let that go, followed up by asking “So you’re diminishing whatever social statement Arbus made because of its unpleasantness?”

“Well, I don’t know if we need that,” Adams replied. “There’s a subtle line there and a lot of people will think I am a Puritan goody-goody, but I believe you can better depict the social condition with a little more idealism.”

Thoughts on Adams’s Interview with Playboy

At this point in my reading, I couldn’t help but be a little frustrated with Adams and his sometimes seemingly hypocritical views. He despises pictorialism, but admits to heavily editing his photos in the darkroom for artistic purposes and praises Picasso. So is it only certain techniques he’s against, or the degree to which they’re used?

Adams also downplays several photographers who are still praised as legends of the craft even today, including Diane Arbus, who, yes is a controversial photographer who allegedly had a lifelong incestual relationship with her brother… but to say that social commentary in photography should be depicted as more idealistic is laughable at best.

Finally, the entire interview seems in poor taste. Not because of my views of Playboy, but because of his. He said it from the start in his autobiography: to him, Playboy is “grossly sexist” and he even insults the magazine during the Q&A. He did an interview with a magazine featuring the nude body as entertainment when he doesn’t even agree with it as an art form. And he did it because he thought he could reach a new audience. If you ask me, it sounds like a politician’s move.

Adams does, however, take some time to educate the reader on the environment and his concerns with national parks, and when asked what the critical fight is at the time, he says the entire environment.

He mentions experts talking about potential water shortages in America’s southwest as soon as in the nineties, saying “The supply from the Colorado River could drop to a dangerous point.”

That statement is now a reality.

“When Watt and the Reagan Administration try to convince the people that environmental issues are bourgeois and play the environmental issues against the economic ones, they’re consciously deceiving the American people,” Adams says. “It would be merely pathetic if the consequences weren’t so disastrous.”

The fallout from this interview would go straight to the White House. In June, Adams received a phone call from Reagan’s assistant saying “The president would like to meet with you and discuss why you dislike him.”

Meet with him Adams did on June 30th for almost an hour. In the meeting, the president spoke at length about his accomplishments as a self-proclaimed environmentalist. The two reportedly didn’t see eye to eye on almost every issue, except nuclear power. While Adams was against nuclear arms, he was in favor of nuclear energy, a point of controversy among his peers.

Whether you agree with his views on politics and photography or not, you cannot deny his strikingly accurate prediction of the future of photography. When asked what he sees coming in photography, he had this to say:

“There’s no end in sight. Electronic photography will soon be superior to anything we have now. The first advance will be the exploration of existing negatives. I believe the electronic process will enhance them. I could get superior prints from my negatives using electronics.

“Then the time will come when you will be able to make the entire photograph electronically. With the extremely high resolution and enormous control you can get from electronics, the results will be fantastic. I wish I were young again!”

Adams would of course not be around for the electronic age, as he would die the following year. History records him as the man who laid the groundwork for countless photographers, and many of his images are now iconic in our world today.

About the author: Azriel Knight is a photographer and YouTuber based in Calgary, Alberta, Canada. The opinions expressed in this article are solely those of the author. You can find Knight’s photos and videos on his website, Twitter, Instagram, and YouTube.