Apple’s M2 MacBook Pro is More Powerful than the Mac Pro Tower, But Not By Much


Benchmarks are coming out for Apple’s new MacBook Pro, and it’s becoming abundantly clear that Apple’s $6,000 Intel-based tower just isn’t up to snuff in comparison to even the most basic M2 configuration.

According to benchmarking software Geekbench, which popped up on Twitter this week, the 13” M2 Macbook Pro scored 8,928. By contrast, the 8-core Intel Xeon Mac Pro, managed a score of 8,027. That’s only a 10% separation, mind you, but it’s still an impressive result for the base model Macbook Pro, which is about 20% the cost of the Mac Pro tower.

A little bit better than my estimates. I’m impressed!
https://t.co/TGHOHw77Ds
Thanks to @amoss_137 for sharing. https://t.co/NS9xODnOdX 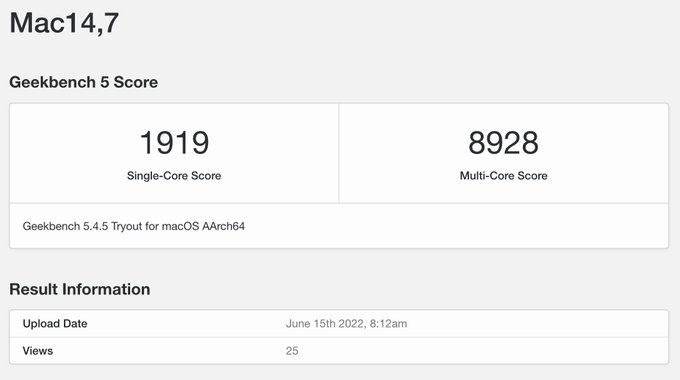 But what about a faster Tower? Well, there are Geekbench testing results for that as well. In a recent test, a 12-core Mac Pro was able to outscore the basic M2 with 3,000 additional points, giving it a 25% advantage. The fully tricked-out Tower with a 28-core Xeon processor beat out the M2 by over double with a score of 20,029.

To be fair, that’s really comparing Apple’s to Oranges (no pun intended). A basic Macbook Pro with half the cores should lose out, even if it has a more powerful processor. It’s the pipelines that give the MacPro an advantage in the higher configurations.

Additionally, the 13” M2 MacBook Pro also outperformed the M1 by about 12% in single-core performance, though the two laptops tested were slightly different in clock speed, which could account for at least some of the separation.

The M2 Macbook Pro had a 3.49GHz M2 Processor, while the M1 had a 3.2Ghz M1 respectively. Where the M2 really shined was in multi-core benchmarks, where it blew away the M1 by 20%. With the aging Mac Pro Tower being the last holdout for conversion to Apple Silicon, it comes as no surprise that the second-generation M2 processor would outperform it head to head, or as close as it could conceivably come.

But even with Apple’s advanced development of the Apple Silicon platform, it was still just barely able to beat out the Xenon processors in the Mac Pro. But that’s more in the M2’s favor than the Mac Pro since it costs so damn much.

When one considers how expensive the tower is, the cost-to-benefit ratio shows that moving forward, it isn’t really worth buying a tower until Apple gets around to upgrading it.

Chances are when that time comes, it’s a good bet that Apple will have developed the M2 Ultra chip by then, which is essentially two silicon chips fused together. The Mac Studio Ultra enjoys that configuration, and after that came out, users were already wondering if the M2 Ultra Mac Pro tower would be just over the horizon.

So if you need a new Mac now, going with the M2 MacBook or the Mac Studio Ultra will not only give you the most bang for your buck but it’ll future-proof your workflow until the M2 Tower finally arrives, whenever that is. But if you can wait, 10% isn’t much to quibble over. Just go get a cup of coffee.

DPReview TV: The most expensive camera in the world: Digital Photography Review