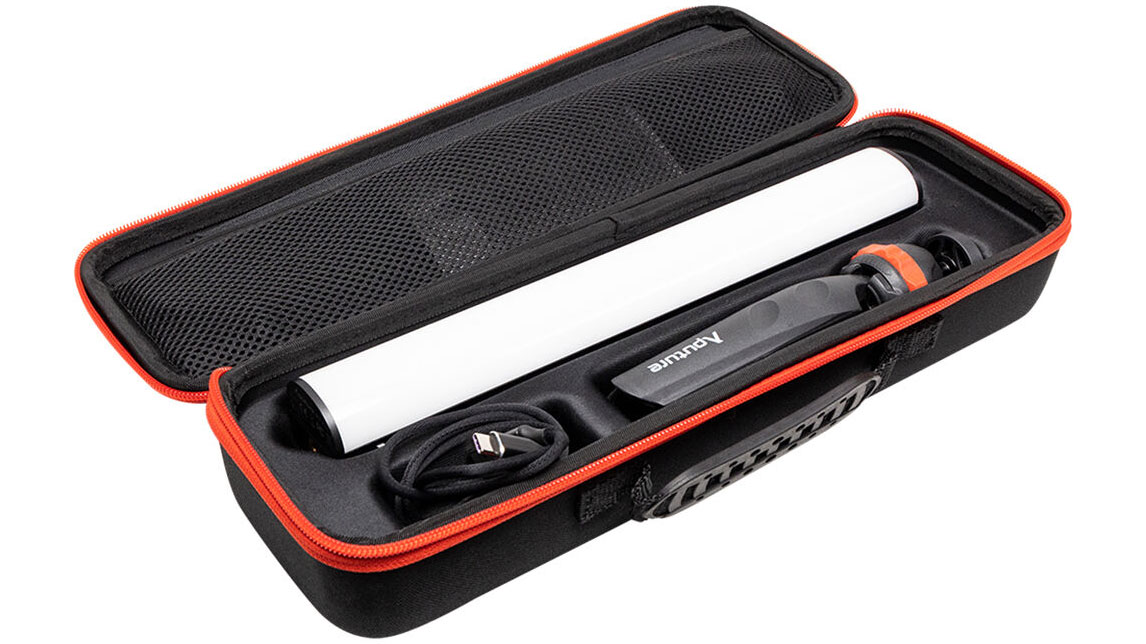 Aputure has announced its new Aputure MT Pro light – a compact 11.8″ RGBWW LED tube light designed for small-scale scenes and hiding in small places on set. The light comes in a kit along with a USB-C power cord, a 45° grid and a small mini tripod to which you can attach it inside a semi-hard zip-up case. As well as basic RGBWW operation, it features a bunch of built-in effects and can be remotely controlled from the Sidus Link smartphone app.

The diminutive footlong LED light contains 36 RGBWW “pixels” with 0-100% dimming with near-stepless increments and a colour temperature adjustable from 2000K up to 10,000K with green/magenta adjustments. Aputure says it can reproduce 90% of the colours in the Rec.2020 colour space, with CRI and TLCI of 95 and 98 respectively.

As well as all of the usual remote control features from Aputure’s Sidus Link app, all of the light’s settings can be controlled directly on the light itself. It also offers optional LumenRadio CRMX support, with 19 DMX profiles including high and low-density pixel controls. It has 9 special effects, including fireworks, fire, paparazzi, faulty bulb, TV, pulsing, cop car, lightning and party lights.

It also sports 7 pixel effects, including colour fade, colour cycle, one-pixel chase, two-pixel chase, three-pixel chase, rainbow and pixel fire – this will no doubt be a handy feature for YouTubers who like to have those colour-changing background lights on the wall behind them.

When it comes to actual brightness, it’s 770 Lumens with 0-100% dimming in 0.1% step increments. It contains 36 LED modules with industry-standard X,Y and RGB control. The RGBWW LEDs offer 2000-10000K white balance with green/magenta tint compensation with advanced HSI and white point CCT control. As with most lights of adjustable white balance, you don’t get exactly the same output throughout the range, but Aputure has offered some photometrics…

It has a passive cooling system, so you won’t hear any fans kicking in when it’s been on for a while, which will be great for anybody using these close to microphones. The aluminium housing should act as a nice big heatsink to let the heat escape fairly quickly anyway. At only 11.8″ long, it’s a relatively lightweight light at just under 400g and features a 1/4-20″ fixture mount as well as two 1/4-20″ accessory mounts.

It contains an integrated 4200mAh battery that Aputure says offers around 2 hours of runtime at full power and also takes about 2 hours to fully charge up over Type-C USB. There’s no word on whether or not you can use it while charging it, but given that the ability seems to be coming as standard with LED lights these days, I think we can expect that it probably can.

The Aputure MT Pro LED tube light is available to pre-order now for $199 in a kit that contains the light itself, the 45° grid, USB-C charging cable and mini tripod inside a zip-up case. No word yet on exactly when it’s expected to ship but hopefully it won’t be too long.