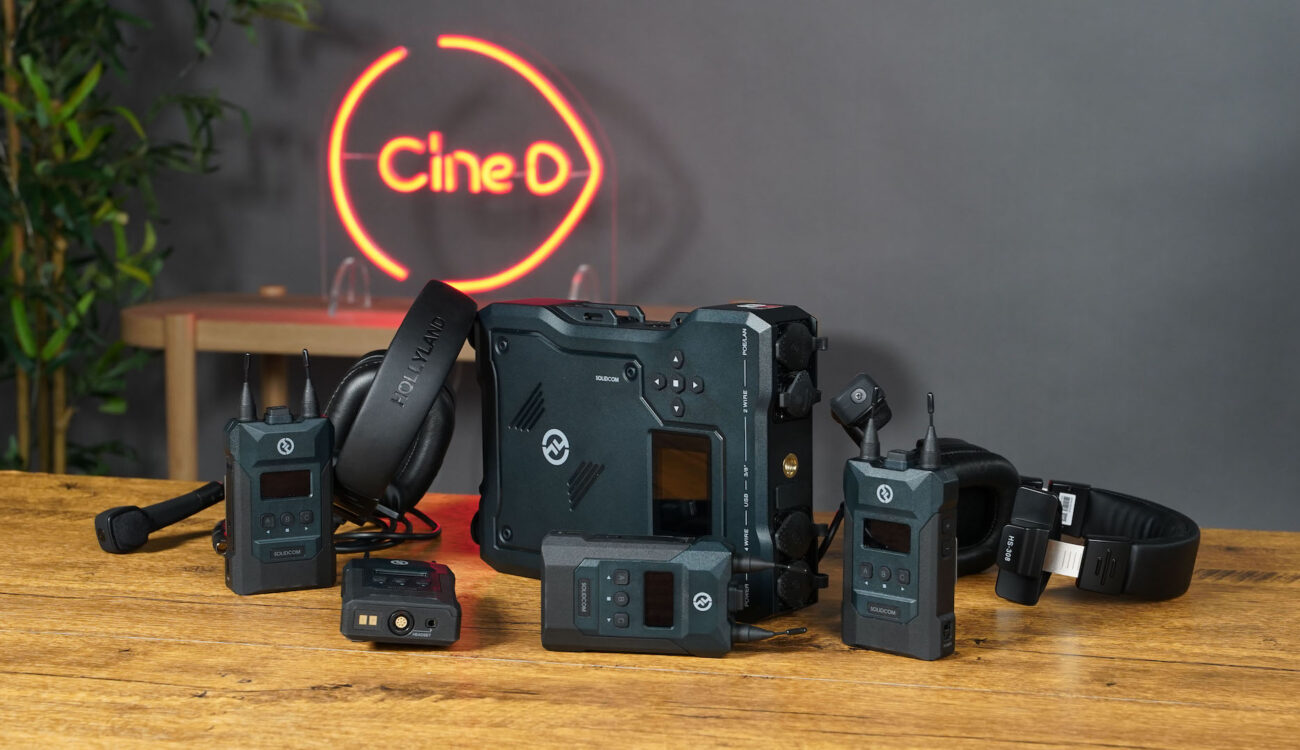 In this guest review, Florian Lindenberg discusses his experience with the Hollyland Solidcom M1 system. Since this wireless intercom system is far more affordable than those of the established major brands in this field, the question arises: Can the Hollyland system offer just as much and can it convince in terms of reliability and usability? Let’s find out!

As we shoot a lot of s35 multicam productions with at least eight team members (mostly 15+), we have been looking for an affordable and reliable wireless intercom solution for quite some time. Here in Europe, we have major brands like Riedel and Green-Go (comparable to Clear-Com and Altair).

These are phenomenal systems, but crazy expensive and not exactly straightforward to use. We’ve spent thousands of euros to rent them, and most of the time you need an extra technician to set them up.

As a reference, this year we paid around 3,500€ (excl. VAT) for a complete package with 20 beltpacks plus technician. Beyond that, if you want to invest in a system from one of the established manufacturers with a comparable feature set to the Hollyland Solidcom M1, you will have to spend at least five times as much. For example, a single Riedel Bolero Beltpack costs around 2,200€.

We came across the Solidcom M1 in mid-2021 and were lucky enough to get our hands on a demo unit. We quickly realized that it was super simple and quite reliable. So we immediately ordered a complete set of eight beltpacks (M1-8B). Together with the demo unit with 4 beltpacks (M1-4B), we were able to cover most of our upcoming productions with it. In the meantime, we have ordered another M1-8B. So to preface my conclusion a bit: Yes, the Hollyland Solidcom M1 system is really quite good, especially since it is a comparatively inexpensive Intercom system.

The quality and robustness of the wireless connection is simply incredible. Even more so when you consider the price. Even though we had events with more than 1500 guests and distances of at least 200m with a huge stage in between, there was literally no degradation of audibility or loss of connection. Not even concrete bunkers like the Wiener Stadthalle could affect the system.

A plus point is that you can daisy chain the base units with CAT cables to extend the range more or less indefinitely. The beltpacks are smart enough to automatically register with the next available base unit. If you are in a no-fuss venue with a straight line of sight, you can remove the omnidirectional antennas and even increase the range with the internal antenna.

Here’s a list of things we’ve discovered while using the Solidcom M1 system on real jobs. It really is a reliable system, and since it’s truly easy to use, it quickly fades into the background a bit on the job, which is of course a good thing. An intercom system should just work and not be an annoyance. However, we did find a few problems and odd details. I guess that’s just the way it is, right?

Please note: At the time of writing this article, Hollyland has sent us a new firmware that addresses most of our feedback/criticism, but we haven’t had time to review it yet. Please refer to this Google Doc directly from Hollyland that goes over the new features.

Thanks again to Hollyland! They have also added different mic gain modes that can be set individually for each beltpack. If you want to learn more, Nino’s review of the predecessor model Hollyland Mars T1000 can be found here.

Considering the price, the scope of delivery, the quality of workmanship and the customer support (especially when implementing feedback), we can recommend it without hesitation.

What do you think? Do you have any experience working with an intercom system of some sorts? Share your experiences in the comments below!

Everything Revealed about Elden Ring at TGA 2021

It Has Potential to Be Great! Vanguard Alta Fly 58T Review