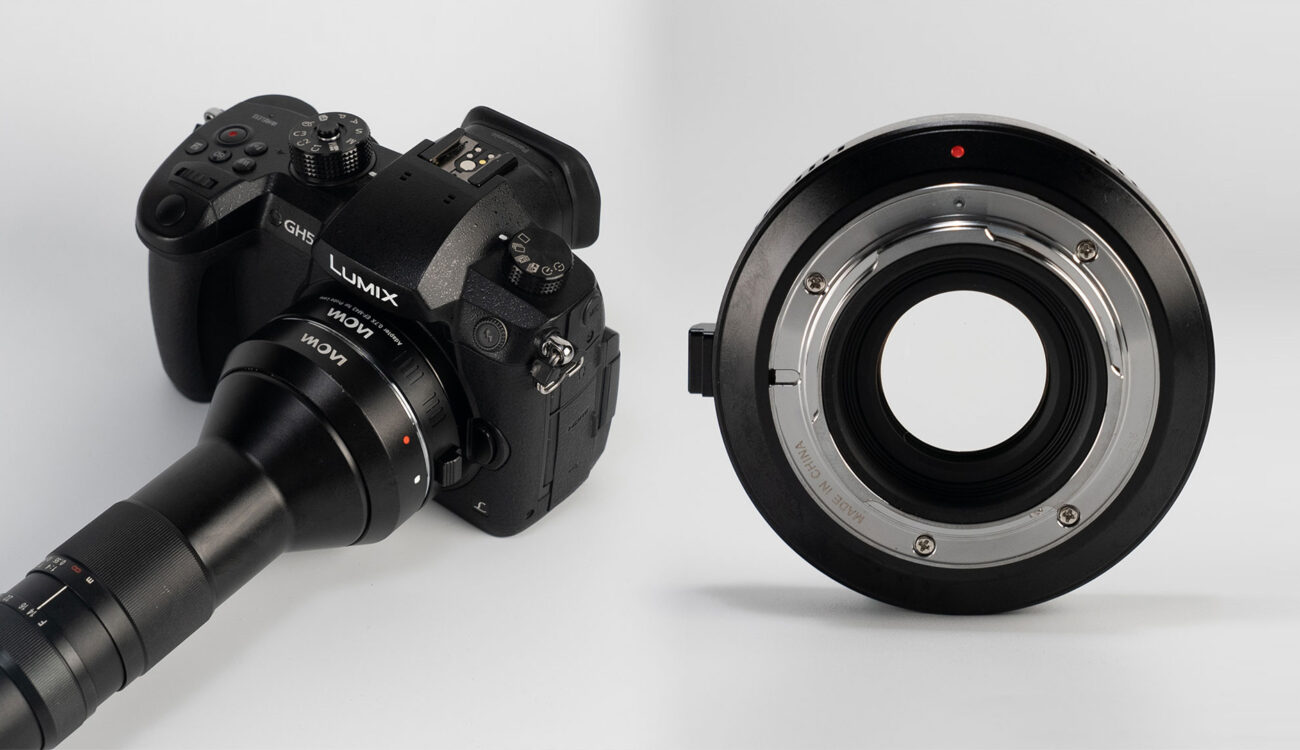 Laowa 0.7x focal reducer, specifically designed for the 24mm f/14 2x macro probe lens (or any other fully manual full-frame EF or PL lens) can reduce the crop factor of Super35, APS-C, or Micro Four Thirds sensors by 0.7x while boosting the maximum aperture by one stop. It is available now for Sony E, FUJIFILM X, Canon RF, Leica L, or Micro Four Thirds mounts for $250.

I dare to say that the Laowa 24mm f/14 2x macro probe lens is the most popular (and unique) lens from the whole Venus Optics portfolio. Ever since the company teased the lens prototype at Photokina 2016, it gained a lot of attention and interest. Two years later, Venus Optics launched the lens through a crowdfunding campaign and since then, many commercial and other cinematographers utilize the 24mm 2x macro probe lens to get interesting b-roll clips that were not possible before. Make sure to check Nino’s 24mm probe “snorkel” lens review in case you missed it.

The Laowa probe lens covers full-frame sensors, so when using it on smaller sensors, a part of the image circle is lost (like with other full-frame lenses). Venus Optics now released a new 0.7x focal reducer for the lens. Let’s take a look at the details.

The new Laowa focal reducer is able to reduce the crop factor of Super35, APS-C, or Micro Four Thirds sensors by 0.7x while boosting the maximum aperture by one stop (in the case of the Laowa 24mm, the aperture becomes an f/10). Optically, it works in the same way as every other focal reducer (a.k.a Speedbooster) on the market – there are many models from Metabones, Viltrox, and other brands.

Venus Optics states that the focal reducer is designed specifically for the Laowa 24mm f/14 2x macro probe lens, but I do not see why it could not be used with any other lens with a compatible mount. However, the focal reducer is only limited to manual lenses as it does not provide any communication between the lens and the camera. The glass, therefore, has to have its own focus and aperture rings.

There will be 10 different versions of the Laowa focal reducer for either Canon EF or ARRI PL lenses and various mirrorless camera lens mounts:

Optically, the Laowa 0.7x focal reducer consists of 3 elements in 1 group. As Venus Optics further states, the focal reducer is durable with full metal construction that should provide stability for adapted lenses. The dimensions are Φ75mm x 25.5mm (EF versions) and Φ90mm x 38mm (PL versions). The weight of the adapter is around 259g.

The Laowa 0.7x focal reducer is available now on the manufacturer’s website and it seems that all the versions will feature the very same price of $250.

Do you use the Laowa 24mm f/14 2x macro probe lens for your video work? Do you use the lens with a Speedbooster? What do you think about the new Laowa 0.7x focal reducer? Let us know in the comments section underneath the article.

Tokyo’s once-futuristic Capsule Tower to be torn down