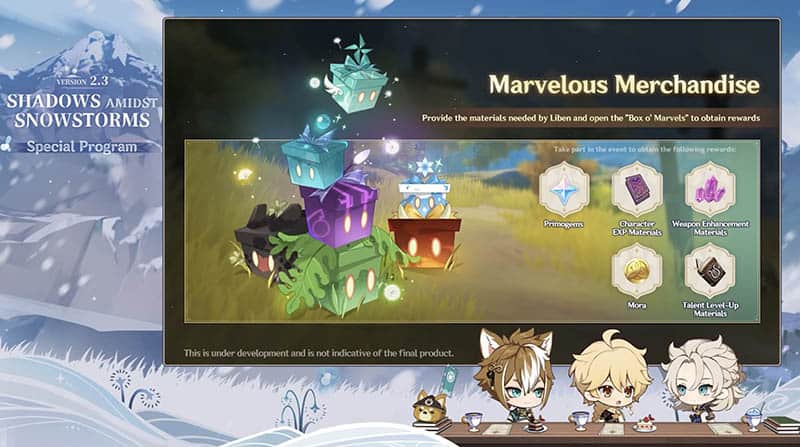 Genshin Impact has hosted several events since its launch last year, with some tying in with the playable characters and their various shenanigans, and others that are completely unrelated to any plot or storyline. Liben, a reoccurring event character, fits into this second category.

Who is Liben in Genshin Impact?

Liben is a charismatic merchant who appears during an event called Marvelous Merchandise, wherein you gather materials for Liben in exchange for Primogems, Character EXP Materials, Weapon Enhancement Materials, Talent Level-up Materials and Mora. Every day throughout the event the materials Liben requests will change, but you will always receive Primogems and other valuable materials in return.

When does the Marvelous Merchandise event start?

It’s been confirmed that the Marvelous Merchandise event will be returning during version 2.3, although it hasn’t been stated exactly when. It will likely run towards the end of version 2.3, though, since in the past this event has had its run towards the end of the version it takes place during. Regardless, players shouldn’t have to wait too long for the event to come around – and in the meantime, you’ll have tonnes of events to keep you occupied, such as the upcoming Bantan Sango Case Files: The Warrior Dog, Misty Dungeon: Realm of Light and Energy Amplifier Fruition.

Where is Liben in Genshin Impact ?

As for where you’ll be able to find Liben once the event starts … well, that hasn’t been hinted at, either. Given he has appeared in both Mondstadt and Liyue in the past, there’s a good chance his next spot will be in Inazuma, where he is yet to have made an appearance. Maybe he’ll be found lounging in the streets of Inazuma City, or perhaps he’ll set up shop at the Grand Narukami Shrine? For now, we’ll just have to wait and see!

The post Liben Genshin Impact Location – How to find him and what to do when you do appeared first on WePC | Let's build your dream gaming PC.

These are the winning images from the 2021 Dog Photography Awards

What’s an Aspherical Lens & Why Your Camera Needs One