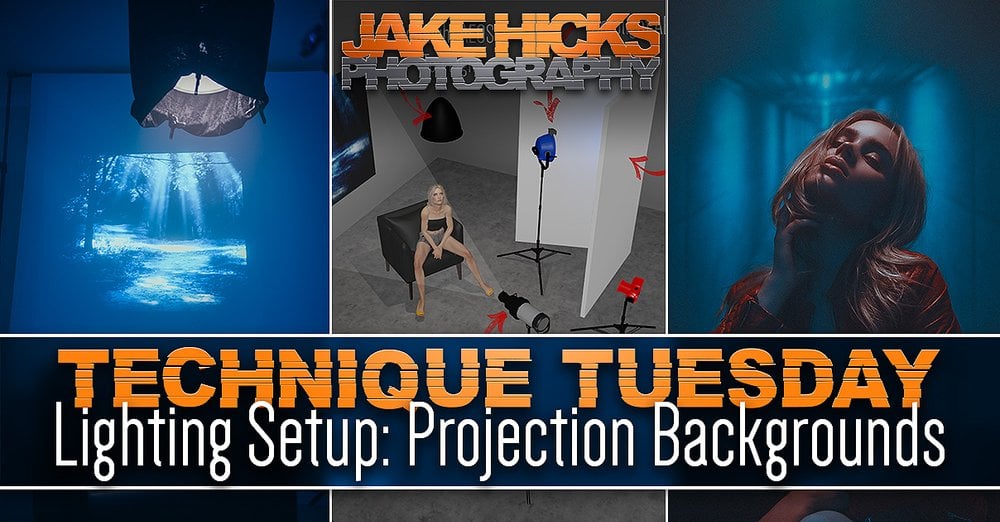 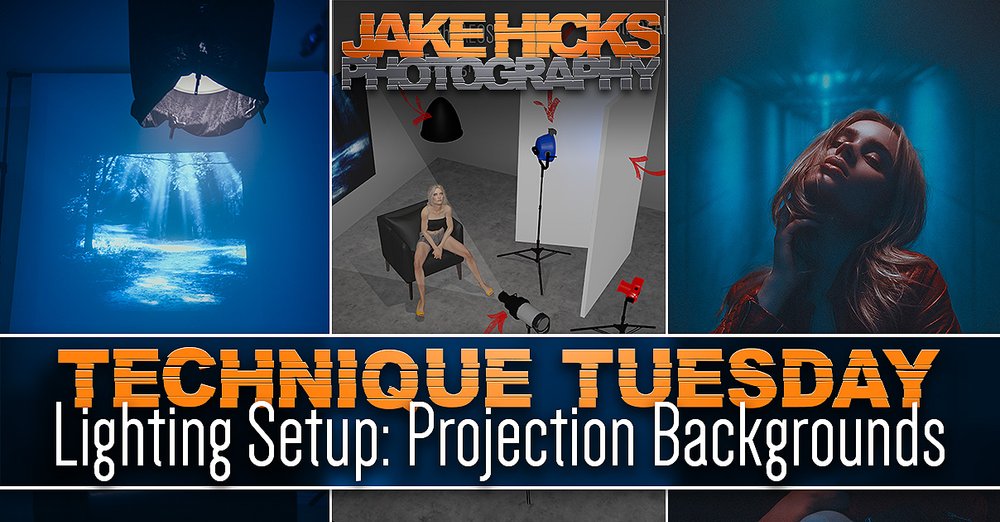 As I’ve always said, I believe projectors to be one of the most versatile and creative tools we have at our disposal today and they’re becoming more and more accessible as each year passes. So why don’t we see more of them in photoshoots?

If you’re not familiar with what I’m referring to when mentioning projectors, I’m simply talking about the regular projectors you may have had at home at one point or another to watch football or movies. Granted, projectors were more popular years ago as you could achieve a huge screen size at home with minimal space requirements, but with TVs dropping in price and them offering wafer-thin screen sizes without them taking up half your living room, projectors aren’t as common as they once were.

I think one reason many people are put off by projectors initially, is cost. Any quick search online regarding the cost of a new projector is often met with a 4-figure response, but these expensive projectors aren’t necessary for what we want to achieve. Years ago when I want to test out some lighting ideas with a projector, I simply bought a cheap second-hand one on eBay for less than £200. It seemed to do everything I needed, albeit with a few minor limitations, so I never bothered to upgrade it to a fancier one.

So if don’t have a projector yet and are interested in picking one up but don’t know where to start, I’ll link an old article of mine where I break down exactly what photographers should be looking for when purchasing one: What’s the Best Projector to Buy for my Next Photoshoot? I will also just mention, that although that article was published back in 2019, it’s still one of my most popular articles ever written. People are slowly cottoning onto the fact of just how creative these tools can be.

I’ve spoken about projector setups in the past and although I have an entire workshop dedicated to the slightly more advanced and creative projector setups, the one I’m sharing here today is fairly straightforward. That’s not to say it isn’t a great setup though, far from it and once you’ve mastered this basic technique, it opens up an entirely new world of creative possibilities.

As always, to avoid the impatient among you from skipping the entire article just to look at the lighting diagram (you know who you are), here’s what we’ll be shooting today.

I’ll post more BTS of this setup below, but for now, let’s break down what’s going on.

What You Will Need

As you can tell from the shots above, there isn’t anything too complex to break down here. We have a projected background behind, with our model in the foreground being lit by a very directional top light along with a subtle coloured fill.

But let’s explain what everything is doing.

Look, let’s expose the elephant in the room right away. What’s this spiral blanket hanger all about?

I wasn’t aware these things were even a thing, but as I was looking for a metal spiral to support my black velvet around my light, I came across them. Their ‘real’ job is to hang sheets and blankets up in small spaces and it looked to be a perfect solution for what I was after.

If you’re still not sure how I intended to use it, take a look at the images below.

Before I explain this, I’m sharing this with you in confidence. If any of these shots end up on @shi**yrigs, I’ll find you!

One issue with working with multiple light sources in smaller spaces is one light affecting another light, or light contamination. For this setup, I wanted to have a projected image on the background behind my subject and then light my subject separately in the foreground. Long-story-short; to make the image bigger on the background to fill the scene behind the subject, you have to move your projector further away, but to do this, your subject may get in the way of the projected light. There are ways around this, like using a rear-projection technique or even placing the projector up high and shooting it over the subject, but again, this needs a lot of space.

Moving the projector further back, results in the projected image hitting the model.

Barn doors often have gaps between each door that let a lot of light out.

This is where the DIY cowl on my light comes in, as although that light is very close to the background, the black velvet cowl stops any of that light from contaminating the projected image behind. It sounds overly complicated, but essentially the cowl just enables me to very precisely control the spread of light from above. Some of you may suggest barn doors as an alternative here, but barn doors are pretty crap in reality, as barn doors often have huge gaps between each of the four doors and this allows a lot of light to spread between them. It’s for this reason, I rarely use them on set.

The way I attach and place my velvet light cowl over the light will vary wildly based on the type of light you have, and the way you attach your light overhead will also affect this too. I’m using a Manfrotto Super-clamp to attach everything to the C-stand, and then attached to that is an extension arm holding a Lite-Tire swivel and lastly, a mini-spring clamp is holding the metal spiral.

There must be far better ways to accomplish the same thing here, but seeing as I had a bunch of lighting grip and clamps here already, I just cobbled this together. If you have alternative recommendations, by all means, let me know.

One thing I like about this cowl is the ability to adjust the amount of light being funnelled down. Due to the spiral metal loop, I can completely encase the light or I can leave a gap at the front to spill more light forward if needed. The other benefit of using black velvet fabric on the ring above is the ability to adjust the depth of the chimney of fabric up and down. If I want a very deep focused tube of light, I c

an let a lot of the fabric hang down, but if I only want a little amount of control, I can raise the fabric up to allow more light to spread.

I appreciate half the article is about a blanket hanger, but I know that if I didn’t explain it, I’d get a ton of questions on it and to be fair, I think its a pretty cool and very cost-effective solution to a lighting problem that you may well encounter yourself at some point. So here are all the details if you wanted to try out this setup yourself.

These blanket driers usually come in round spirals, not in the geometric spiral shape you see me using here. It’s worth getting the one with straight curves like mine as it makes it easier to clamp and also easier to enlarge when like this. I actually opened up my spiral a little to accommodate the AEOS 2 light, but you may not need to with yours.

I’ve just explained the top light as well as the velvet cowl that controls the resulting light, next we need to look at what we’re going to do with all those shadows created by that very directional light directly overhead.

Adding a fill light isn’t too tricky and there are a few ways you can go about it, but first I’ll explain what I used.

My fill-light was another Rotolight AEOS 2 and this was pointed into one of my DIY V-Flats. Both of which were positioned just out of shot to camera-right.

As you can see from the shot above, I set my light to a colour that was already present in my image being projected behind the subject. That way, any fill light we see on the model in the foreground of the shot, takes on the appearance of the colours behind and this all helps to tie the shot together. Side-note: One thing I really like about the RGB Rotolight LED here, is the ability to fine-tune the colour to exactly match whatever projected image I have. This is trickier to do with coloured gels as you often don’t have exactly the right colour on-hand.

If you’re not too bothered about your image looking amazing, you could always substitute this bounced light with a large softbox or umbrella here instead.

As I mentioned in the spiral-hanger section above, the projector is off to camera-left and pointed towards the background. The placement of this can be tricky as we’re looking to achieve a few things.

The above points are all worth considering and you’ll need to play with what fits with your room or shooting space. As you can see in the lighting diagram above; I ultimately went for a projector position just off to my left that was as close to hitting the model without the light touching her. This meant I was able to get a big enough image without the distortion being too dramatic. In fact, you can see that I was able to pretty effectively correct any distortions in the image behind and this is especially noticeable in the leading-lines of the corridor shots behind the model. The distortions that are created by placing the projector off-axis like this can be a pain to correct. It’s worth practising with images behind the subject that don’t have any straight lines or geometric patterns at first.

If you position your projector correctly, you should be able to keystone out any distorted lines. Even in shots like this that have very pronounced leading lines.

There is practically no limit to how creative you can get with the image behind your model, but here are a couple of pointers to get you started.

If your gauge of difficulty is based on how many lights you use in a shot, then this setup isn’t too tricky. That being said, there are a few areas you need to be mindful of, especially if you’ve never used a projector in your shoot before.

Using a projector to add a realistic background to your shot is just one use for it, but don’t forget that you can use other creative elements too.

You can also use a projector to add purely creative elements to your backgrounds as well. Choose how creative you want to be with it beforehand.

Good luck guys and if you give this one a try, please let me know how you get on. Plus, if ever want some feedback on your shots, be sure to post them in my -Share-a-Shoot- every Monday on my Facebook Page.

Jake Hicks is an editorial and fashion photographer who specializes in keeping the skill in the camera, not just on the screen. For more of his work and tutorials, check out his website. Don’t forget to like his Facebook page and follow him on Instagram, too. On Jake’s Facebook page, you can also tune in for a live stream every other Tuesday night. You can also sign up for the Jake Hicks Photography newsletter to receive Jake’s free Top Ten Studio Lighting Tips and Techniques PDF and be sure to download his free 50-page studio lighting book. This article was also published here and shared with permission.