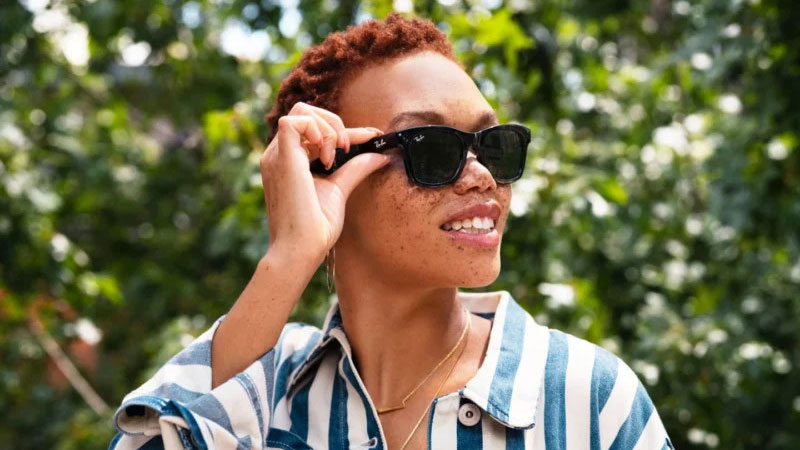 Last September, the then Facebook teamed up with Ray-Ban to give us the new Ray-Ban Stories, their first pair of “smart glasses”. They combined the traditional look of Ray-Ban frames with Facebook tech and a pair of cameras to capture and share every moment of your life to social media. Yeah, not exactly a new idea. Still, almost immediately, privacy concerns started to pop up.

Facebook has changed its name to Meta now, but those concerns are still around and Meta has released the “Meta Human Rights Report” detailing its impact on the world, with a section that talks specifically about Ray-Ban Stories and the associated privacy risks. They acknowledge that there are definitely privacy issues surrounding the tech but essentially suggest that it’s up to the wearer to deal with it.

The Ray-Ban Stories glasses contain a pair of 5-megapixel cameras, open-ear speakers and a microphone which can record videos of up to a minute.  The main issue about their privacy is based on a lack of “informed consent from bystanders”. This essentially means that other people around you while you’re wearing them need to know that they’re recording and are happy to appear in any photos or videos you shoot.

Right now, there’s really no easy way to know that somebody wearing these shades is recording you. At first glance, there’s not really a way to tell that they’re not just regular Ray-Bans, either.  Meta’s report acknowledges that the issues exist but suggests no solutions as to how to really fix them. After Meta released their report, New York Times tech reporter Ryan Mac brought the topic up on Twitter…

Facebook/Meta released what it’s calling a “human rights report” today. It’s a lot of PR, but it’s interesting to note what the company had to say about its own smart glasses and “salient risks” about “informed consent from bystanders”. https://t.co/9myK2DzZmM https://t.co/LsBSE6dmV2 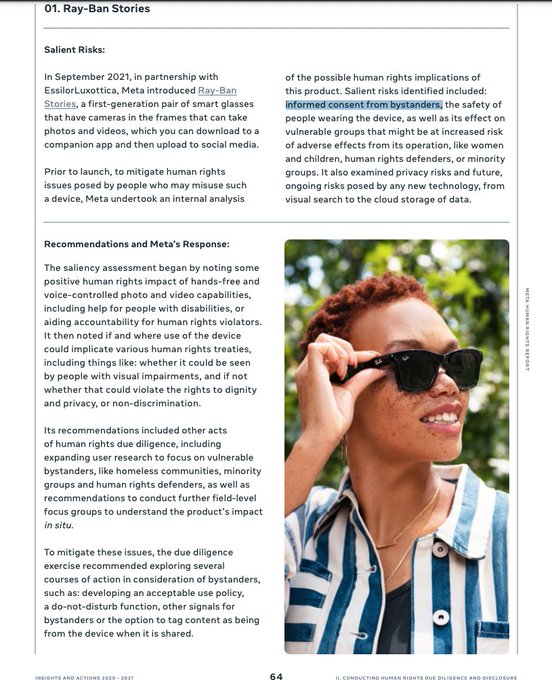 Basically, in designing a product that wasn’t going to get the same response that the “ugly” Snapchat Spectacles received.. something that was a little less obvious, they’ve gone too far and made a product that isn’t obvious enough. To the average bystander in the street, there are no obvious clues that they contain cameras or when those cameras recording. There is a little red dot that turns on when recording, but even Meta’s own report suggests that the indicator is very difficult to see. Ryan follows up with another tweet stating:

This is the company saying that “informed consent” from people being recorded by the devices is an issue. But it also makes no proposals on how to correct that beyond doing “user research” and some jargon about exploring “other signals for bystanders”.

I’m happy to be convinced otherwise, but perhaps there is just no way to obtain true informed consent from bystanders for a recording device built to look like glasses?

Having a red dot that turns on while recording is not informed consent.

Meta commissioned the law firm Foley Hoag to conduct the report as a result of years of accusations that Meta has turned a blind eye to online abuse for far too long that’s let to real-world violence throughout the world. And while it acknowledges the privacy issues in the case of Ray-Ban Stories exist, it does nothing to offer a solution other than what basically amounts to “we should look into this some more”.

Whether or not that will happen is another matter entirely. After all, Ray-Ban Stories has been out for 10 months now and nothing’s changed so far. In reality, there may actually be very little that they can do at this point. At least, not for units that have already sold and are out there in use every single day. Perhaps they can make them a little less subtle for new designs going forward, though.

You can read the complete report here.