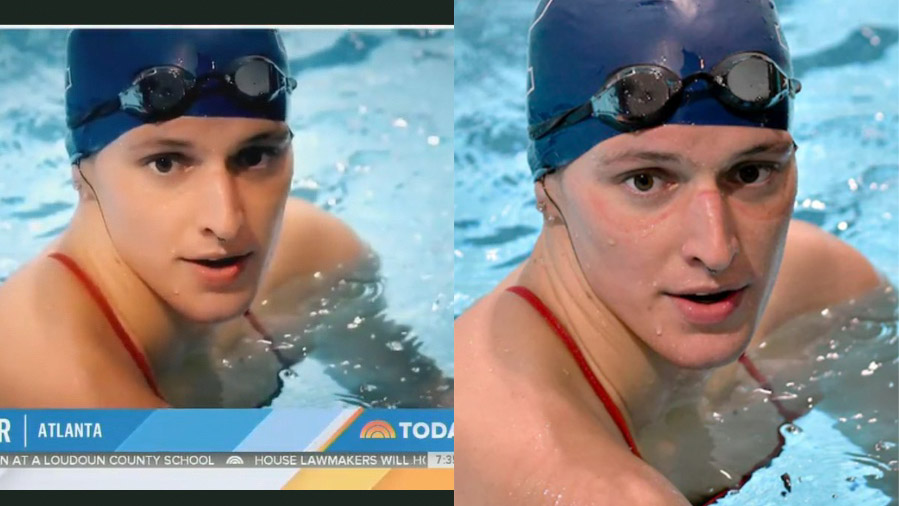 NBC’s Today show has attracted controversy after allegedly airbrushing an image of transgender swimmer Lia Thomas after she finished first in an event.

The University of Pennsylvania student was competing in the NCAA Championships when the image was taken. Twitter users quickly noticed the difference between the images and called out NBC for its apparent doctoring of the image. Further investigation, however, reveals that there is more to the story than merely that of a Photoshop misdemeanour.

Lia Thomas became the first transgender athlete to win the NCAA title in the women’s 500-yard freestyle at the weekend. Thomas was born biologically male, although she transitioned to female in 2019 and has been taking hormone replacement therapy since then.

According to the NCAA, transgender athletes must have been taking hormones for a minimum of 1 year prior to competing, which Thomas had adhered to. Prior to 2019, Thomas competed in male races, placing 554th as male.

So what does this have to do with air-brushing a photo, you may ask? Well, in pretty much every way you look at this it becomes problematic. Firstly, why is a news outlet airbrushing any photos? Surely that is the number one rule in journalism. What was the reason behind the decision to change it? We have to hope that it was just a poorly made decision on the part of NBC and not done in order to try to make Thomas look more feminine, as many of the comments on Twitter have suggested.

The inclusion of transgender athletes in women’s sport has become an increasingly hot topic, particularly since trans weight lifter Laurel Hubbard competed in the 2020 Olympics. Supporters of women’s sport argue that even after hormone replacement, the physical advantages of experiencing male puberty cannot be downplayed.

However, according to scientific experts, there is little or no scientific research regarding the performance of elite transgender athletes. The United Nations has called required hormone suppression “unnecessary, humiliating and harmful,” and there continues to be debate about the extent to which testosterone provides an advantage in athletic performance.

With all this in mind, it’s fairly obvious that there is already a considerable amount of controversy around the subject, both in support of trans rights, and support of women’s sport. The problem is compounded when a news outlet apparently changes an image and in doing so, appears to lend weight to one camp of argument over another. The issue is further compounded by the so-called ‘cancel culture’ where anyone who speaks out in favour of women’s rights as athletes is often immediately branded as “transphobic”. In turn, this can actually create more negative attitudes and illicit more violence towards the trans communities.

This is likely to be an ongoing controversy as gender rights and trans rights continue to evolve, particularly in the world of sport. Media outlets and photojournalists have a duty to report the facts, and not distort the reporting of events based on popular political points of view. As uncomfortable as it may be, the world needs to listen to each other and acknowledge differences in opinion without those opinions becoming weaponised or politicised.

As I said, gender arguments aside, why are they airbrushing any of these photos for anybody?

These Fuji GFX Lenses Will Make Your Camera Shine!