Netflix offline downloads just got even handier – here’s how 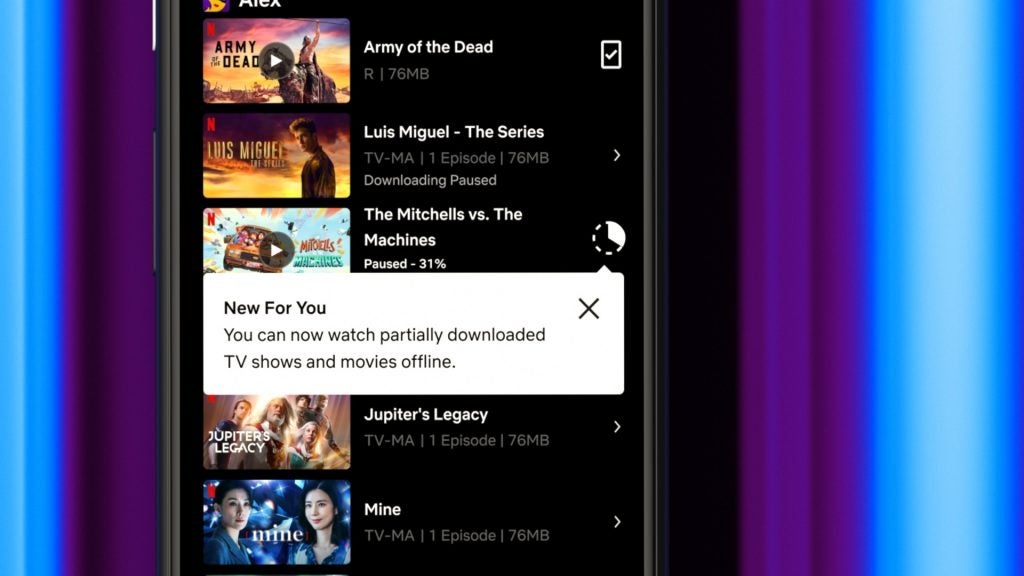 Netflix is taking a page out of the gaming industry’s book by enabling viewers to start watching offline content even if the file hasn’t completely downloaded yet.

The feature, which is available on Android from today and coming to iOS soon, is ideal if you run out of data or don’t have enough time to complete the download on your Wi-Fi connection at the airport, for example. The feature could also come in handy if users run out of hard drive space, as is often the case when downloading loads of content for a long journey.

Netflix says it understands users don’t always have enough time, space or data to get the whole three-hour Scorsese epic onto their limited hard-drive space so is allowing you to get some of it in.

In a blog post, the company wrote: “[W]e’ve improved the Netflix download experience so you can now start watching The Mitchells vs The Machines or the next episode of Luis Miguel – The Series even if it hasn’t completed downloading. Once you’ve regained a strong enough connection, you can choose to finish the download and keep watching — avoiding those surprise notices that you’ve gone over your data limits.”

The company says the feature will begin testing on iOS in the coming months. It could be another way for Netflix to distinguish itself from other streaming services, none of which have offered a partial download service before.

Netflix wasn’t the first to offer the offline downloads feature, which is now exceptionally common on apps like the BBC iPlayer, Amazon Prime, Disney Plus and HBO Max. Apple TV Plus also offers offline downloads.

Netflix does provide a handy Smart Downloads feature that’ll automatically ensure the next episode of a series is stored for offline viewing once you’re connected to Wi-Fi once again.

Smash Bros. Ultimate’s Next Fighter Will Be Its Last

6 Ways To Say ‘Goodbye’ To Those Ugly Pimples