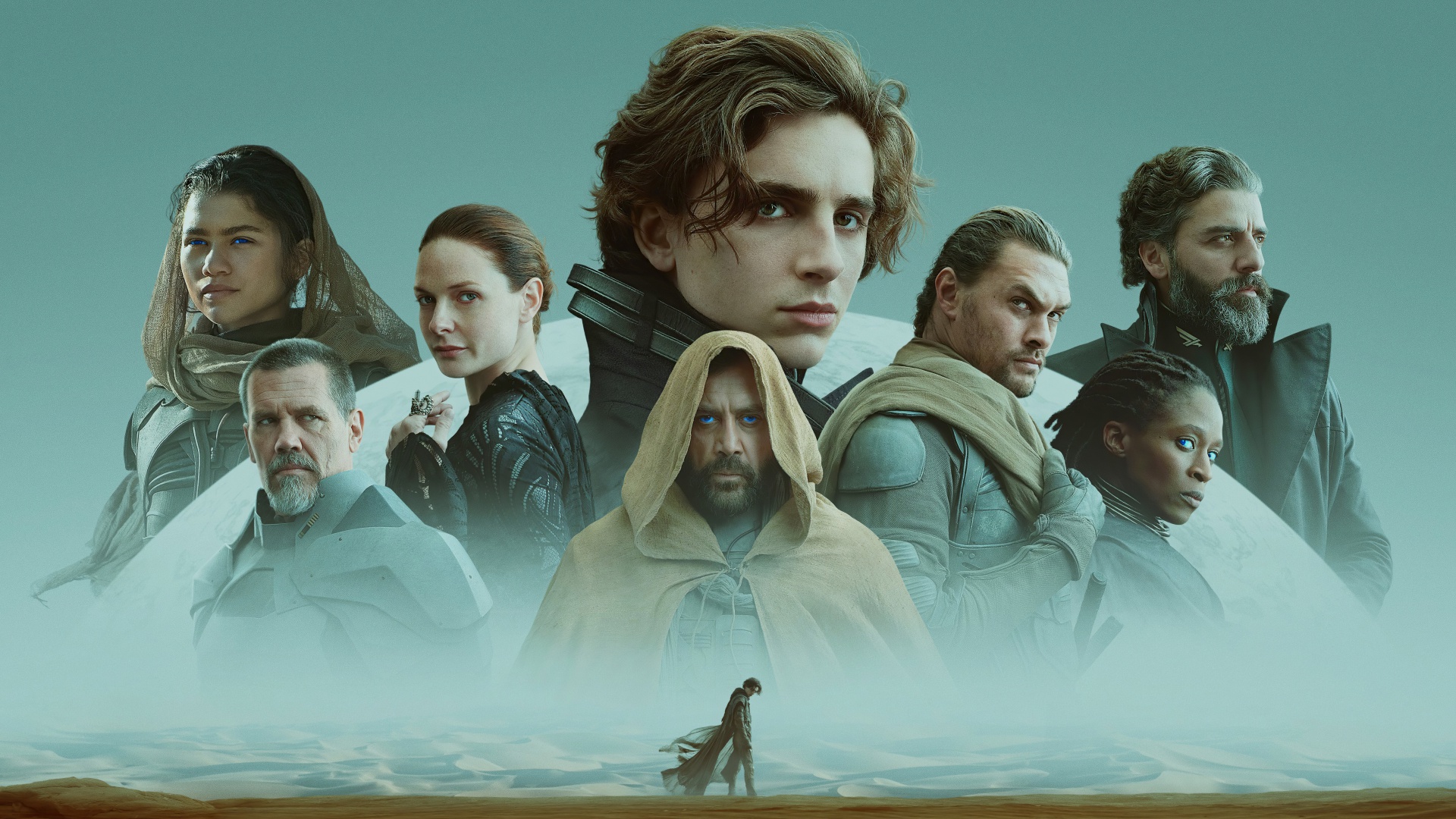 Denis Villeneuve has quickly risen up the ranks to become one of Hollywood’s best directors, with a portfolio that includes smaller, intimate human dramas like Prisoners and Enemy to big-budget sci-fi extravaganzas like Arrival and Blade Runner 2049. His latest epic, Dune, is a mix of what we’ve seen him deliver before in the best ways possible.

Dune is an adaptation of the 1965 eponymous novel by Frank Herbert, and it’s not the first one to bring its story to the big screen. First adapted by David Lynch in his 1984 film, and then in 2000 by John Harrison in the form of a miniseries, Dune has long stayed in the cultural conscience, if only as a subdued memory only celebrated by the novel’s biggest fans. Villeneuve big-screen adaptation in 2021, partly scarred by its HBO Max streaming debut on the same day, is merely part of the story, roughly the first half with a planned sequel in the works. While that may mean that the story in this two-and-a-half-hour film is essentially incomplete, the experience that Dune (2021) provides on the big screen is anything but.The technical wizardry in Dune is unparalleled, with Villeneuve’s previous blockbuster Blade Runner 2049 being blown away by the scope and ambition of the various factions, planets, vistas and soundscapes found in the new film. While I personally am more drawn towards the dark, dirty cyberpunk world of Blade Runner, Dune is a completely different beast. I once heard someone describe it as “Star Wars meets Game of Thrones” (before either of those properties ever existed) and I completely agree. Dune is first and foremost a political thriller, and while its marketing may have you believe it’s ripe with action sequences (and there are plenty), don’t go into it seeking a mindless space adventure.

Dune’s primary narrative follows the House Atreides, as they are directed by their emperor to leave their home planet Caladan, and arrive on the desert planet Arrakis to rule its spice trade amidst rising political tensions. Paul Atreides (Timothée Chalamet), the heir of the House, is disturbed by visions of a mysterious girl (Zendaya) and a possible future, one where his house is tainted red as part of a Holy war among the different factions that reside and want to take control of Arrakis. Aiding Paul is his mother Jessica (Rebecca Ferguson), his father and Duke Leto Atreides (Oscar Isaac), his weapons master Gurney (Josh Brolin) and mentor Duncan (Jason Momoa).

On the opposing side is House Harkonnen, led by The Baron (Stellan Skarsgård) and his nephew Rabban (Dave Bautista), who on the orders of the Emperor plan a coup against House Atreides as their rule over Arrakis is challenged. There’s a lot of other supporting characters and factions, many of whom will no doubt have a much larger role in subsequent followups, but I’m only sticking to the main, active roles that are played in Dune: Part One as titled in the film itself.

Everyone gives a great performance as expected, but special mention needs to be given to Rebecca Ferguson and Timothée Chalamet who are an absolute delight. The latter has proved himself to be a gifted actor among his peers, and Paul is a perfect role in which he can grow if the sequels come to pass. I honestly didn’t expect Ferguson to have as big of a role as she does, but maybe that was just the marketing. Oscar Isaac is great as always, and his role here feels like a redemption of the hands he was dealt with in the new Star Wars sequel trilogy. It’s awesome to see Dave Bautista return to collaborate with Villeneuve, and while we don’t get to see him much, I’m certain we’ll feel more of his wrath in the future. Jason Momoa is a friendly face and captures the audience as the heart of the movie for the majority of its run time. Skarsgård’s role as The Baron may go down in history as one of the most menacing villains in cinema, but that is if we get to see him come out of the shadows more in the sequel.

There’s a pattern here, where I love everything about the film, but need more to really dig deep into the rich world and characters. Perhaps the biggest example of that is Chani (Zendaya) who, despite being in every piece of marketing, is barely in the actual movie. It’s clear that her story will make up a large part of the sequel, which is why I wonder if it would’ve been a better decision to shoot both movies back to back ala The Lord of the Rings. Dune may be a precursor to many of the modern high fantasy stories we know of today, but that doesn’t mean its film adaptation should be given the benefit of the doubt considering how its contemporaries have managed to get adaptations that stand on their own providing a satisfying experience for newcomers.

Being a wholly new universe with its own religion, politics, geography, and other facets of society, the first half of Dune is a slow, methodical unravelling of how the world works. This of course includes multiple expository moments explaining to the audience the aforementioned aspects, but Villeneuve’s masterful direction mixed with Greig Fraser’s beautiful cinematography, Hans Zimmer’s music, and an incredible sound mix elevated by Joe Walker’s rigorous editing make every moment special, including what in any other film would constitute as ‘mundane’ sequences.

Visual effects can get you quite far, but practical makeup, sets, and effects really lay the foundation for the audience to really believe in the spectacle. This is one of the reasons why so many of us fell in love with the original Star Wars trilogy, and why its universe, as established in those films, remain believable. Dune’s prose may have been written long before any of our modern franchises existed, but this is a case where the passage of time and the advancements of technology come as a gift. Every supernatural element in the film, whether it be giant sand worms, small fauna, futuristic ships, “filmbooks” (my personal favorite), shields, and even “magic” is imbued with a sense of realism, thanks to a perfect blend of CGI and practical elements.

I had the privilege of watching Dune on a giant IMAX screen, which is how it’s meant to be seen and heard, although the experience was tainted by the screening being in 3D. There is absolutely no reason whatsoever to watch this film in 3D, which only takes away from the natural, picturesque beauty that Greg Fraser paints with wide lenses and natural light. The sound design and mix makes every loud bang and every breath in a closed room intense, as it should.

Having never read the source material, I was interested in seeing how the filmmakers manage to bring forth this new world and the culture within it to life for newcomers. Dune is an absolutely dense film, and you can feel the clock ticking away even though it is just a smidge longer than the average Avengers instalment. Similar to Blade Runner 2049, each minute is utilised extensively, with the camera often lingering on faces and locales that may have been cut in a more studio-friendly version by another director. While that may be seen as ‘boring’ or ‘pretentious’ by the movie-going audience that Warner Bros hopes to capture the attention of, given the enormous budget of the film which isn’t based on an established, mainline property, I on the other hand love it.

Villeneuve has time and again proved to be an exemplary visionary, but it’s no secret that his films, which have only grown in scope, size, and budget, have not yet managed to make the dent in the box office that could warrant future sequels on the same properties. While I love Blade Runner 2049, I also know that its poor box office returns mean we may never see another film set in the same universe again. Dune, on the other hand, is doing well enough at the cinemas despite being released on VOD (with HBO Max in the US). Just to compare, Blade Runner 2049 made north of $250 million worldwide on a rough budget of $150 million during the entirety of its theatrical run. Dune, which was released in international markets just a few weeks prior to its release in India and the US with a similar budget (by estimates), has already made over $120 million at the time of writing. It also helps that Dune is arriving soon after modern audiences have become comfortable with its complex topics in other media, and its star-studded cast absolutely helps its case.

I can’t help but feel a little disappointed at its somewhat lackluster ending though. While purists may say “It’s only the first part”, the realist in me can’t help but wonder if and when that sequel(s) will be made. As of right now, Dune: Part One lives up to its name in giving us just a taste of its wonderful world, with a vast story only a section of which has been told. Coming out of the theater, I have many questions that essentially boil down to ‘so why do I care?’ and that’s not because the film has poor characters or story beats. It doesn’t. There’s simply too much time devoted to setting up the world instead of telling an earnest story, which really kicks into gear in the second half. So why do I care? Well, it’s everything aside from the characters and the pure story that I really love. The music, the sets, the costumes, the culture, the religion, the politics, the planets, the alien technology, the mystery, it’s all there. Now it just needs a compelling narrative that draws the audience in not on the basis of how grand it looks or feels, but how personal it is for Paul and others who accompany him on this new journey.

Dune: Part One releases in theaters on October 29, 2021 in Maharashtra. The film is already playing in theaters across the country, along with being available on HBO Max in supported regions.

What Is a Smart Coffee Maker?