Photo of Orangutan Wins Nature TTL Photographer of the Year 2021 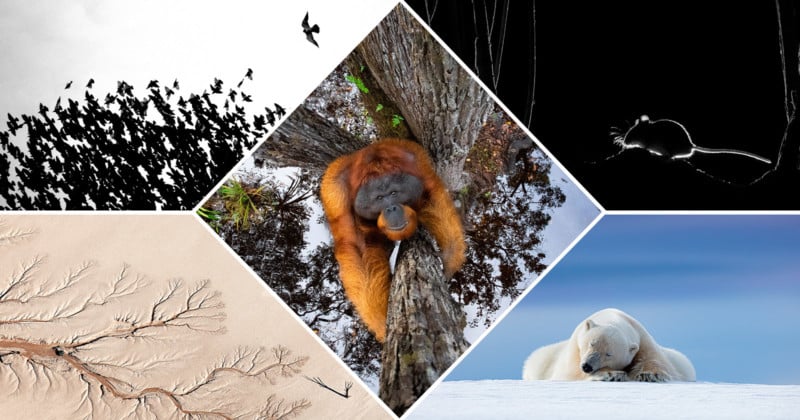 The Nature TTL Photographer of the Year 2021 competition has announced its winners that span across nine themes. The competition is hosted by Nature TTL, an online photography tutorial and educational source focused on wildlife and landscape photography.

The organization launched its photography contest last year and has returned with another round in 2021, too. This year, the competition received over 8,000 entries from nature photographers all over the world who competed for the title of “Nature TTL Photographer of the Year 2021” and a grand prize of £1,500 ($2,120).

The categories for the competition were split as follows: Animal Behavior, Camera Traps, Landscapes, Small World, The Night Sky, Urban Wildlife, Wild Portraits, and a new Under 16 category, which carried the Young Nature Photographer of the Year 2021 title.

Photographer Thomas Vijayan was crowned the winner of the “Animal Behavior” category as well as the overall winner of the competition. He received the “Nature TTL Photographer of the Year 2021” title and the grand prize for his portrait of an orangutan climbing a tree upside down. This is the second competition Vijayan has won this year thanks to this photo, as he also took top honors in the World Nature Photography Awards 2021 that were announced in March.

Will Nicholls, Founder of Nature TTL, commended Vijayan’s image as very unique and noted that it immediately stood out to the judging panel. “The unique perspective and composition mean you are immediately trying to figure out what exactly you are looking at,” says Nicholls.

The photograph is meaningful to Vijayan because the orangutan population has been greatly reducing due to human-led deforestation.

“Trees over 1,000 years old — which are a major asset to our planet — are being cut down for palm oil plantation,” explains Vijayan. “As humans, we have a lot of alternative choices to replace the oil, but the orangutans don’t have any options other than losing their home.”

Vijayan says that he is appreciative of the honor, which has given him the opportunity to further share awareness of this issue.

John Formstone won this category with his photo titled Silhouetted Wood Mouse. Capture with a Nikon D3300 and one off-camera flash, which was positioned to the rear of the mouse, he created an atmospheric silhouette of his subject in a patch of small woodland just to the rear of his house.

“Suspended in time; a sense of waiting pervades this valley where nothing seems to have happened for a thousand years,” the Roode says, describing his winning image. The dry river bed of Tsauchab River, in Central Namibia, resembles the lone Camel Thorn tree and its shadow.

This abstract photo by James Gifford won the “Small World” category. The image depicts fungus-growing termites engaging in a “dance,” as they swarm around the photographer. Gifford explains that the future kings and queens of these termite colonies leave their nest on a “nuptial flight,” where they lose their wings moments later, with most of them failing in their quest to start a new colony of their own. The photograph took hundreds of shots as the composition was tricky, especially with the termites crawling all over him, but “it was worth it in the end.”

The mysterious eye in Ivan Pedretti’s winning photograph is a formation of rocks, found in Uttakleiv beach, Norway. The photographer also included Northern Lights in his image, which cast a soft light over the landscape. Pedretti used Sony A7R II with Sony 16-35mm f/2.8 lens with a 20-second long exposure.

Grant Thomas’ winning image, titled Manta Space Ship, was shot as the photographer positioned himself flat on the sand and watched one of the Manta rays looping around whilst feeding on a could of planktonic creatures. After a moment, the sea creature drifted close enough for the photographer to capture this shot. Grant explains that Manta rays are “filter feeders,” meaning they consume large amounts of plankton and small crustaceans to sustain themselves, and the Maldives “is one of the only places in the world where you can dive with these majestic animals at night time.”

Kallol Mukherjee’s winning photograph, titled Winged Family Members, shows the harmonious relationship between humans and wildlife, as the two barn swallows are building their nest right inside a shop in the Himalayas where they are safe from wildlife predators. The photographer explains that these birds are revered “as the goddess of wealth and fortune,” and as such gladly accepted, even with all the inconveniences and nuisances caused by the birds.

The peaceful photograph of a sleep polar bear, shot by Dennis Stogsdill, was awarded the winner of the “Wild Portraits” category. The bear was photographed in Svalbard, Norway, while the photographer had climbed a ridge and decided to take a moment of rest and noticed the beautifully soft background of the afternoon skies that had formed behind the polar bear taking a nap.

Thomas Easterbook, a 13-year old photographer from the United Kingdom, was crowned the “Young Nature TTL Photographer of the Year 2021” with his winning image of a peregrine falcon tackling a starling murmuration, with the stark contrast of the birds against the light sky creating a moody atmosphere. Easterbrook also secured a £250 ($353) camera voucher prize.

The rest of the runners-up of each category can be viewed on Nature TTL winner’s gallery The organization has also announced that the 2022 competition will open later this year and any interested photographers can register on the website for future updates.