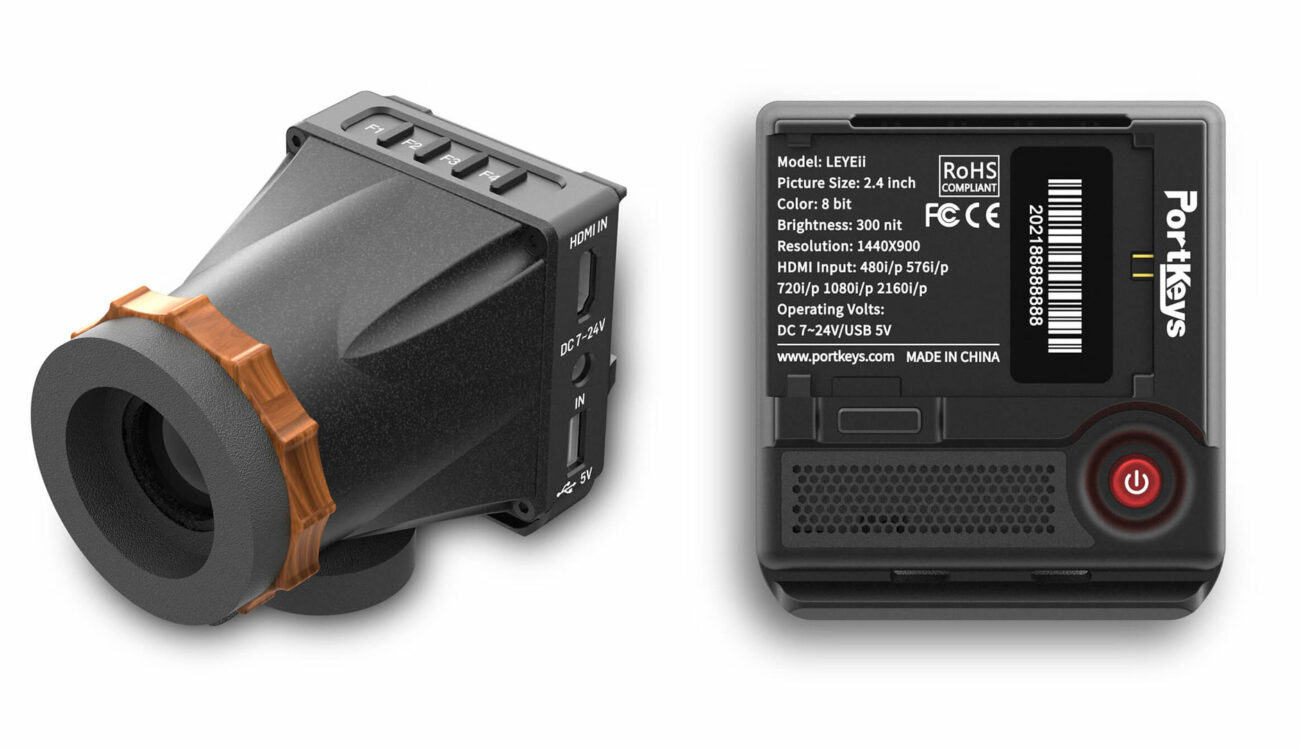 Chinese manufacturer PortKeys has just introduced a new version of its famous HDMI-only compact electronic viewfinder: the PortKeys LEYE II. The LEYE II now features a built-in battery plate. Also, PortKeys has been teasing an SDI version of its viewfinder for quite some time now, which should be released soon. So let’s take a closer look at these!

With a very affordable price of $399, this entry-level electronic viewfinder filled a hole in the market. And, if you have a camera without a built-in EVF – like the Canon EOS C70 or Sony FX3 – it could have been the perfect solution.

However, the original PortKeys LEYE had one major drawback: you need to power it externally. For example, suppose you have a small DSLR/mirrorless/cinema camera. In that case, you probably don’t want to unnecessarily rig your camera with V-Mount batteries or a power bank only to feed an EVF.

Let’s make it simple here; the PortKeys LEYE II has its predecessor’s same features and specifications. In a nutshell, that includes:

You got it; the LEYE II is a pretty decent electronic viewfinder that now features a built-in Canon LP-E6 battery plate at the back of the unit. Unfortunately, there is no indication about the battery life from PortKeys. However, if we do some maths: the LEYE II draws around 3W max, a Canon LP-E6N battery has an 1800 mAh capacity and a 7.2V voltage, so you should get a little over 4 hours of runtime (V x Capacity / P = 7.2 x 1.8 / 3) with one battery, which is fantastic.

PortKeys is also teasing a new version of the LEYE with SDI and HDMI input ports: the LEYE SDI. This version should also have a built-in Canon LP-E6 battery plate.

Also, the barrel connector should be replaced by a 4-pin power input at the back of the unit, next to the SDI input. Talking about the SDI input: the viewfinder should support resolutions up to 1080p60 via the SDI Input.

All the other features and specifications, including the display/monitoring tools/mounting points – and so on – will be identical.

The PortKeys LEYE II is available now for $399/€360, which is the same as the original LEYE it replaces.

The LEYE SDI will retail for $549/€500. It is already listed on our partners’ websites B&H and CVP, so it should be available very soon!

What do you think about this new version of the LEYE? Do you have the original one, or did you wait for this new version with a built-in battery plate? Do you think the LEYE SDI will be more versatile for your needs? Don’t hesitate to let us know in the comments down below!

InvestigatorPro.com is for sale | HugeDomains