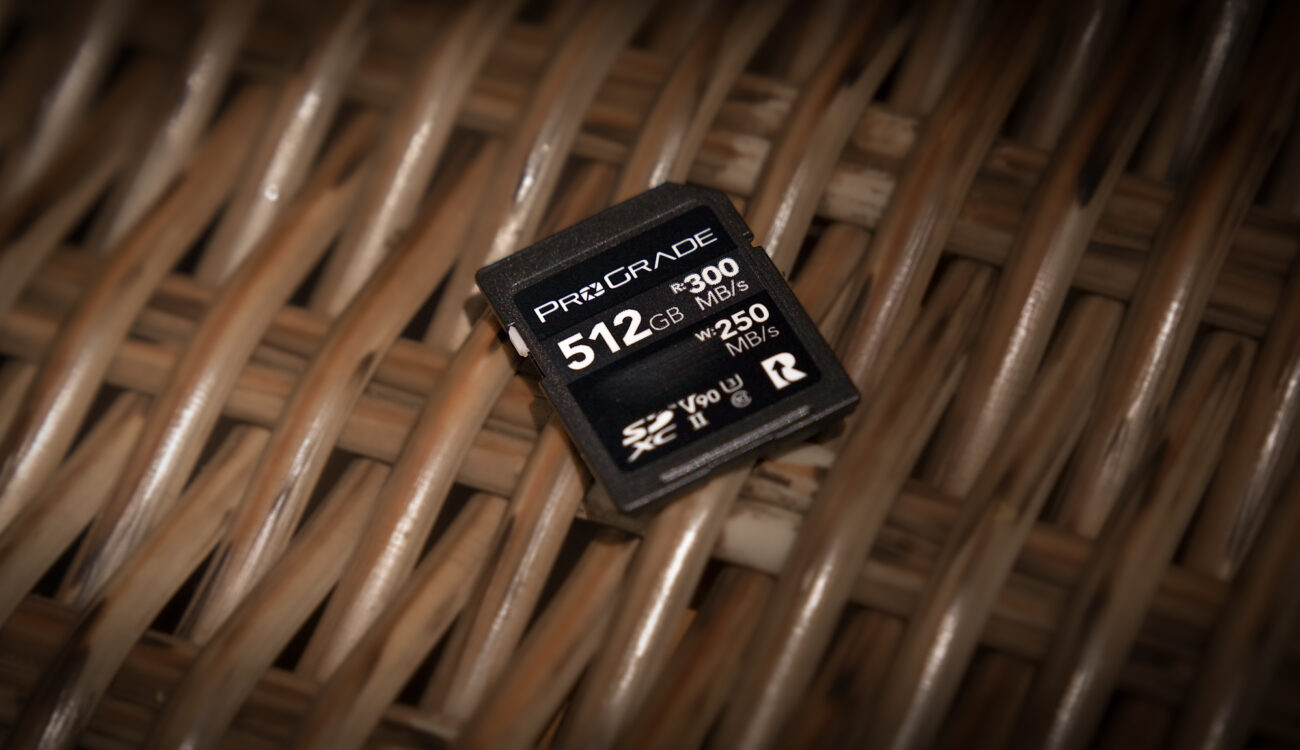 On paper, the recently released ProGrade 512GB UHS-II V90 memory card is sitting right near the top of the SDXC memory card field. Banner features include a 300 MB/s read speed and a 250 MB/s write speed and, of course, the 512GB of space for all the juicy 4K RAW footage your camera can throw at it. But how does it hold up in the field? Find out by continuing to read my review.

Despite a shift towards the CFexpress format in the stills and video world, we still have a variety of cameras that require a fast and trustworthy SDXC memory card. Among those fantastic cameras is the Canon EOS C70 (which just received a comprehensive CineD lab test from my colleague Gunther which you can view here. Additional news regarding the Canon C70 is the addition of Canon RAW in the form of a free firmware update from Canon – you can download that update here.

The Canon C70 is data-hungry while shooting 4K and especially while shooting Canon RAW. Up till now, SanDisk has been the market leader in memory cards. Because the previous V90 SDXC lineup topped out at a measly 128GB capacity, the advent of Prograde’s $459 512GB UHS-II SDXC V90 has the potential to become the go-to choice for Canon C70 shooters.

I’ll be running the ProGrade’s 512GB UHS-II SDXC V90 (hereafter referred to as the ProGrade 512GB V90 card) through a few tests:

Before we get started, I should mention another competitor with a comparable product: the Wise 512GB V90 SDXC UHS-II Memory Card (though at a more expensive $699).

According to my MacBook Pro, the ProGrade 512GB V90 does indeed have the 512GB capacity as promised by ProGrade. (Windows devices may return different results). There is still something amazing about having 512GB of space within such a tiny card casing, but perhaps I’ll get over that feeling as the capacity of these cards is pushed further and further.

I’ll admit there’s a psychological hurdle with a card like this. If anything happens while filming 1920×1080 footage on a single 512GB card, there’s trouble. The advantage to 128GB cards is that even though you may have to switch them every 30 minutes, there’s some comfort in knowing you aren’t losing the entire day if something happens.

To help offset any worry on my or your parts, ProGrade offers free software (with purchase) called “Recovery Pro” and “Refresh Pro.” “Recovery Pro” promises to recover lost files on your card should an accidental format happen or some other type of card issue. “Refresh Pro” is intended to optimize performance of your ProGrade cards. Both programs can be downloaded here.

It is worth noting that the ProGrade software only works with both a ProGrade reader and ProGrade branded memory cards. Here is a useful article from ProGrade on how flash memory degrades over time and why a program like “Refresh Pro” might be necessary for the long-term health of your precious memory cards.

When I first inserted the ProGrade 512GB V90 card into the Canon C70, I didn’t see a media warning. I took this as a good sign because the C70 is not shy about alerting users when their media is not up to spec. Some of my older SDXC cards don’t play well with the Canon C70. The reason for this is that the camera landed during the shift to faster-and-larger-capacity CFexpress media. We C70 users might have missed the boat on the CFexpress format, but that doesn’t mean the camera isn’t great and worth using often.

For comparison sake, on a 128GB card, we get 42 min of RAW ST at 23.98fps or 41 min of XF-AVC UHD 4K at 23.98. Being able to record nearly 3 hours of RAW ST on the C70 is an absolute delight despite my already expressed fear about putting everything on one card. Personally, I might go dual-slot record mode with two 512GB cards playing simultaneously for really mission-critical 1-shot content, but that’s my paranoia speaking.

It might also be worth mentioning that Canon RAW isn’t my go-to choice for every circumstance, and this fantastic video from Björn Kurtenbach using the Canon C300 MK III (same sensor as the C70) helps explain why.

To put a final bow on the compatibility question with the Canon C70, I went ahead and burned through a 512GB card to see if there was a drop in performance or even a heating issue. I’m happy to report there wasn’t a hiccup or warning indicator throughout the RAW ST recording test.

I used an AJA System Test Lite to check the read/write speed expressed in Frames/Second and then in MB/Second results for the ProGrade 512GB V90. Again, this software is available for free here. The system allows users to predict the capabilities of any drive system for recording and playing back various resolutions and codecs.

The card was formatted in advance for the Canon C70, and all tests were completed using the ProGrade Digital Dual-Slot UHS-II SDXC USB 3.2 Gen 2 Type-C Card Reader (advertised Data Transfer Speeds up to 1.25 GB/s).

The AJA System Test Lite allows you to set a specific file size to stress test. Standard UHD 4K and ProRes (HQ) seem like a great benchmark. For television, due to the 16×9 aspect ratio, I tend to shoot in UHD 4K instead of Cinema 4K.

Here are those MB/s results.

And here is a Read/Write 5GB stress test using Blackmagic Design’s Disk Speed Test software (Version 3.4). Again, you can download this software for free here to test your media at home. The card was formatted in advance for the Canon C70.

Here’s the SanDisk 128GB MB/s test set to 4GB and with the same resolution and codec settings as the 512GB V90 tests (For reference, full settings are located on the left side of the screenshot below.)

Now for the Blackmagic Disc Speed Test on the Sandisk 128GB MB/s.

Slightly better MB/s write results on the Blackmagic software versus the AJA.

And now we’ll give the ProGrade 128GB a look. First, with the same codec and resolution settings in the AJA software:

A glance between these results and the SanDisk results above lets us know that we’re landing in a similar spot with read/write speeds. A guess on my part, but perhaps this is why SanDisk lowered their price to more closely match ProGrade’s current pricing.

And now the same 5GB stress test with Blackmagic Disc Speed Test and the ProGrade 128GB:

Again, nearly identical results with a tiny write-speed edge to the ProGrade 128GB. I also double-checked the capacity of both 128GB cards, and they landed at the advertised 128GB capacity.

Long-term reliability aside, from a pure performance test standpoint, I would feel very comfortable with either V90 128GB options from SanDisk or ProGrade.

As we continue the move towards CFexpress, there are still a ton of camera platforms and even audio mix devices relying on the tried-and-true SDXC memory card. The advantage with ProGrade is that it meets the need of all shooters looking for high capacity and high speed 512GB cards, especially Canon C70 users.

There’s a lot of trust required on the part of photographers and cinematographers when choosing memory card manufacturers and the read/write speeds from ProGrade are nothing to scoff at. The $459 price tag also comes in several hundred dollars cheaper than the other 512GB V90 competitor.

What do you think? Are you a Canon C70 shooter? What other cameras do you think would would be great for this card? Let us know in the comments below!

You can now buy Steam Deck parts. Here's how much they cost