Razer Deathstalker V2 Pro review: Back from the dead 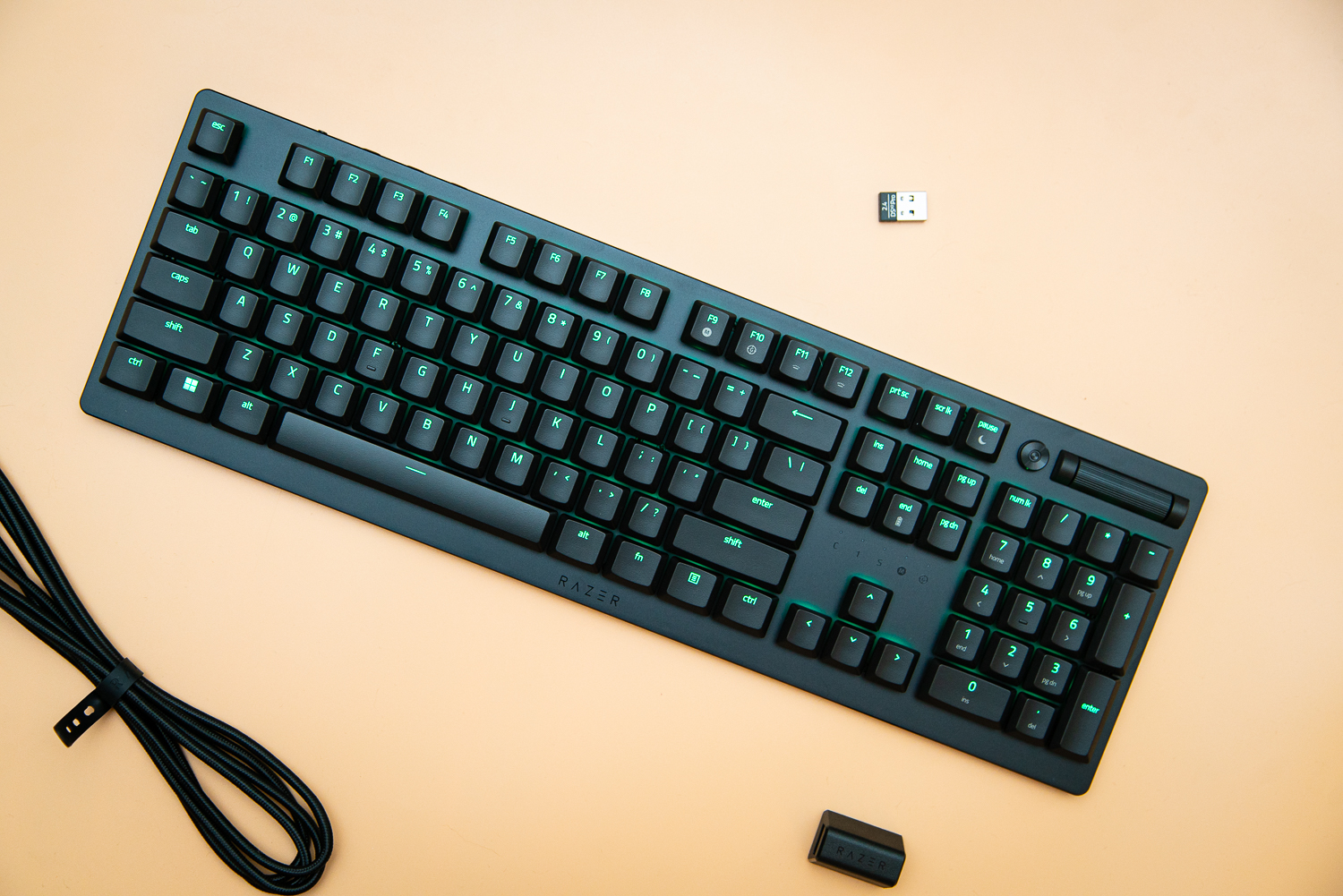 “The Razer DeathStalker V2 Pro is a solid low-profile gaming keyboard, but it’s not for everyone.”

Razer is throwing its hat into the low-profile gaming keyboard ring with the DeathStalker V2 Pro. The trend started with Logitech’s G915 two years ago, and Razer is offering up a similar gaming experience with a few critical improvements: USB-C charging, Bluetooth 5.0, and low-profile optical switches.

Although the additions are welcome, and the features are on-par with the best gaming keyboards you can buy, Razer is asking the same $250 that the G915 launched at (you’ll commonly find it for $30 to $50 less now). The DeathStalker V2 Pro is a great gaming keyboard, but it’s only a better option if you can find it on sale for the same price as the G915.

It’s strange calling the Deathstalker V2 Pro a version two of anything considering this model shares almost nothing in common with the first version released a decade ago. That version was a chiclet-style membrane keyboard, while this one goes full mechanical. If anything, the Deathstalker V2 Pro takes inspiration almost exclusively from the Logitech G915 TKL, which was previously the main option for a low-profile gaming keyboard.

Low-profile mechanical keyboards use special switches that are thinner than a traditional mechanical switch. Combined with thinner keycaps, they massively slim down the size of a keyboard and provide a different gaming/typing experience.

The Deathstalker V2 Pro looks a lot like the G915, but with a few critical differences. The keyboard is only 26.6mm thick at its thickest point and 21mm at its thinnest, and the top is covered in 5052 aluminum (aircraft-grade). Around the back, you’ll find a USB-C port for charging, three buttons for different Bluetooth devices, and a cover for the USB-A dongle.

Compared to the G915, the big difference is the lack of media and function buttons. You can still use functions like Game Mode, but there isn’t a dedicated key for them. For media buttons, Razer simplified the layout with a single, multi-purpose button next to the large metal volume wheel. It’s a decent solution, but I prefer dedicated keys to avoid any mishaps with double and triple taps.

Another big difference comes in the keycaps, which evenly shine light much better than the G915. Razer even made secondary icons on keys transparent, allowing you to see all of the RGB glory going on underneath. The lighting looks fantastic, as it usually does with Razer peripherals, and it’s a big plus if you can synchronize your setup with Razer Chroma.

You can connect the Deathstalker V2 Pro with either Bluetooth or Razer’s low-latency HyperSpeed wireless tech. Razer says it’s “25% faster than other wireless tech,” but when I pressed about what exactly that meant, I didn’t get a satisfying answer. HyperSpeed is below 1ms, which is on par with Logitech’s Lightspeed and Corsair’s Slipstream, among most other 2.4GHz wireless connections.

The perk of HyperSpeed is that you can connect two devices to a single dongle — say the DeathStalker V2 Pro and the Razer Orochi V2. Logitech offers multi-device support, but only on office keyboards like the Logitech MX Mechanical, while Corsair matches what Razer is offering with some Slipstream devices it offers.

Bluetooth 5.0 is a welcome addition, allowing you to pair up to three devices and toggle between them using three dedicated buttons on the back of the keyboard. Bluetooth is becoming standard on most gaming keyboards, even on cheaper options like the Akko 3068B. Razer goes a small step forward by giving you a dedicated Bluetooth toggle on the back, as well as three buttons to easily switch between devices.

Bluetooth works with just about anything, and with a little setup, you can even use the DeathStalker V2 Pro on a Mac.

Although you’ll technically get the best battery life with Bluetooth, Razer says the DeathStalker V2 can last up to 40 hours at 50% brightness on the HyperSpeed connection. You’d normally save battery life by the keyboard automatically going to sleep, but it’s not enabled by default on the DeathStalker V2 Pro. After setting up the keyboard and leaving it overnight, it was dead by the time I returned to it.

You can enable automatic sleep in Razer Synapse, but it really should be enabled by default. Once I turned it on, I had to top off the Deathstalker V2 three times over the course of about two weeks. It charges very fast, too, with about a quarter of the battery life returning in under 30 minutes.

You have two switch options on the Deathstalker V2 Pro: the linear Red switches, which are available now, and the clicky Purple switches, which will ship near the end of the year. It’d be fair for you to write them off as rebranded versions of the switches available in the G915 TKL, but Razer’s offerings have a lot more going on.

The linear switches have an actuation distance of only 1.2mm. It’s not the adjustable actuation down to 0.2mm you’ll find on the SteelSeries Apex Pro Mini, but it’s still plenty fast for twitch reactions. They’re a bit lighter than Logitech’s offerings, too, with a force of 45 grams as opposed to 50 grams.

For gaming, these switches are great.

The combination makes a difference for gaming, with just a hair faster reflexes and response time. The bigger deal is that Razer is using its optical switches, which it brought over from the Huntsman Mini (just in a slimmer form). Optical switches get rid of debounce delay, which can cause a tiny amount of latency with a traditional mechanical switch. It’s very difficult to spot that latency on a regular switch, though, even though Razer’s switches are technically faster.

For gaming, the switches are great. My main issue is that Razer isn’t offering a tactile option, which knocks the typing experience down a peg. The clicky Purple switches are only available on the Deathstalker V2 Pro and wired version (not the TKL version), and they’re not arriving until the end of the year. Reds are the right choice for gamers, but it was the tactile bump of the G915’s switches that made me fall in love with it for gaming and typing.

Feel all comes down to personal preference, though, and the DeathStalker V2 Pro is still an excellent gaming keyboard. I played through Destiny 2, The Ascent, and Resident Evil 2, and I never missed a keystroke. The switches didn’t both me too much while playing, either — I settled in almost immediately, while most keyboards require a small adjustment period.

The lack of tactile switches makes it a much less satisfying typing experience.

The big feature missing for gamers is an 8,000Hz polling rate, which is available on keyboards like the Corsair K70 RGB Pro when wired. Razer has already shown it can do 8,000Hz polling with the Huntsman V2 TKL, so I was surprised to see the DeathStalker V2 Pro locked to 1,000Hz. In fairness, that’s fine for the vast majority of gamers — 8,000Hz rarely makes a difference, if any — but it seems like a necessary inclusion for a keyboard Razer is asking $250 for.

Typing is where the experience changes. I like low-profile mechanical keyboards for typing, but the DeathStalker V2 Pro is clearly more focused on gaming. The lack of tactile switches makes it a much less satisfying typing experience, but I was still able to finish this review and several other articles without any slip-ups.

Razer offers Synapse for all of its peripherals, and it’s one of the better utilities available today (read our Cyberboard R2 Le Smoking review for an example of a bad utility). It’s not as feature-rich as Corsair iCue, and it’s not as simple as Logitech G Hub, but there’s a nice balance of functionality and customization without too many extras bogging down the experience.

In Synapse, you’re free to rebind any of the keys to macros, text inputs, mouse commands, and so much more. Basically, if there’s an input you can do, you can bind it to a key. The DeathStalker V2 Pro has a full second layer of commands, too, called Hypershift. This gives you a second layer of commands that you can assign to all of the functions as you can on standard keys.

My favorite function is game mode. Razer gives you a few options like disabling Alt + F4 and the Windows key, and those options are fairly standard. The boost is that you don’t have to turn on game mode. You can set it to automatically kick in when you boot into a game, which is a huge plus for a feature like this.

The lighting effects in Synapse are solid, too, giving you a few basic effects like spectrum cycling, breathing, and so on. You can add as many layers as you want, though, giving you a lot of room for customization. The DeathStalker V2 Pro is fully Chrome compatible, too, so you can sync it with your other Razer peripherals. And, you can store your lighting and key assignments directly on the keyboard across five profile banks.

My main pain point is that you have to at least open Synapse to get the keyboard to automatically put itself to sleep. Through keyboard commands, you can record macros, cycle through different lighting effects, and toggle between devices, so you can reasonably use the DeathStalker V2 Pro without ever touching Synapse. Because of the battery life issue, though, you have to open the software at least once.

The Razer DeathStalker V2 Pro offers some solid quality-of-life features over the mold Logitech set with the G915, but the lack of switch options holds it back. It’s a decent option for gamers, but the typing experience wasn’t nearly as premium as I expected from a $250 keyboard.

Are there any alternatives?

Yes. The main alternatives are the Logitech G915 and Logitech MX Mechanical, both of which come with low-profile mechanical switches. They’re cheaper, too, though the MX Mechanical is more focused on typing than gaming.

If you venture out a bit, the Keychron K3 is a low-profile mechanical keyboard for around $90, and you can even grab it with hot-swappable optical switches. Corsair offers its K70 RGB low-profile, as well, though it’s expensive and limited to a wire.

How long will it last?

Razer says its key switches will last for 70 million keystrokes, so you should be able to use the DeathStalker V2 Pro for a decade or more depending on how much you type.

Should you buy it?

At its retail price, no. Although the DeathStalker V2 Pro is a great gaming keyboard, the Logitech G915 often sells for $30 to $50 less, and it comes with a tactile switch option.

Viennese personalities on stage and on rooftops

Seven big photography struggles and how to solve them