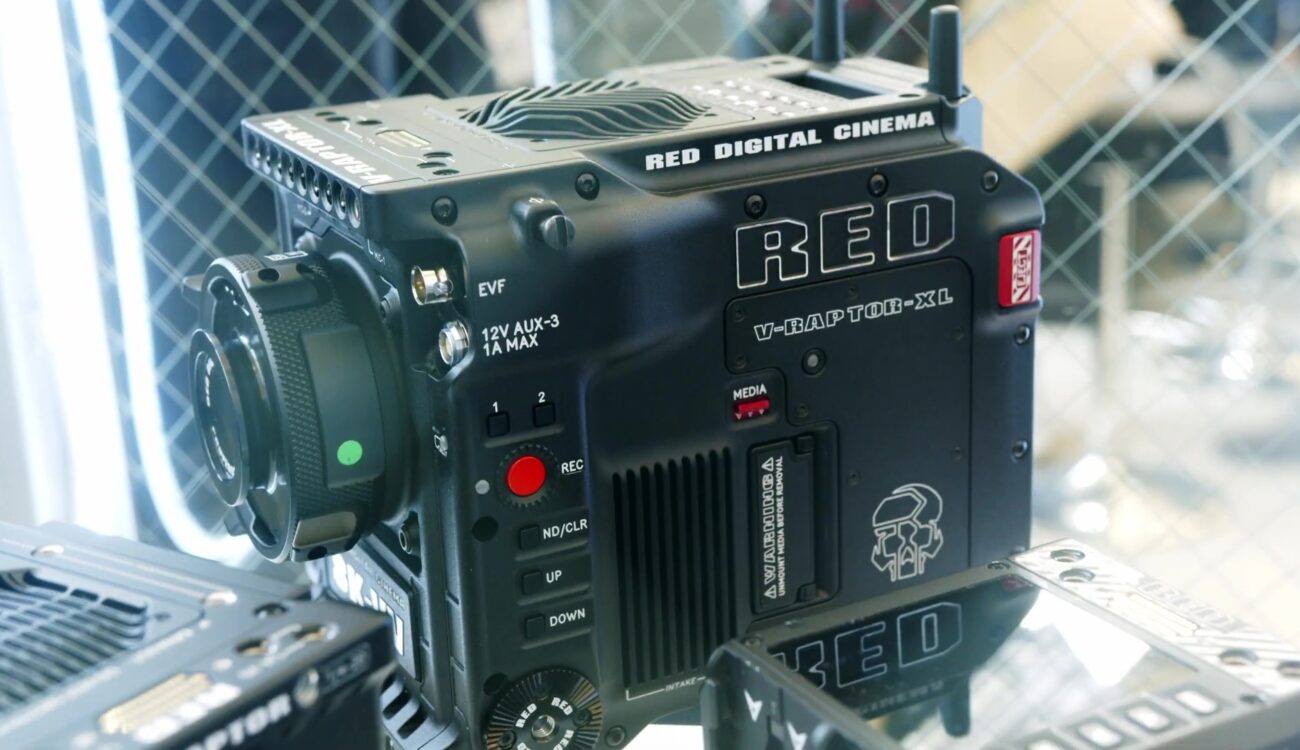 The release of the RED V-RAPTOR XL camera was teased last year and, according to RED, is supposed to come out in 2022 for $39,500. The camera was on display at BSC Expo in London last weekend and it seems that it will offer the same 8K VV sensor as the V-RAPTOR, but with much more I/O, internal ND filters, and more. What else do we know?

The next RED camera from the DSMC3 lineup seems to be the rather huge V-RAPTOR XL. RED actually teased the camera last year in September already when the V-RAPTOR was announced. When they put up the product page for the “regular-sized” V-RAPTOR, the XL version teaser appeared when you scrolled all the way down.

Last weekend, during the BSC Expo in London, the RED V-RAPTOR XL was on display next to its smaller DSMC3 siblings. Does this mean the camera is coming soon? Let’s sum up what we know about the XL so far.

Judging from the size, price, and button layout of the V-RAPTOR XL, this will not be an owner-operator camera but rather a rental cam designed for multiple-headed camera crews. From RED we know that the V-RAPTOR XL will have internal ND filters, 24V AUX power, and an interchangeable lens mount.

From the teased photos, on the operator side of the camera, we can only see a few buttons such as the record start/stop, ND filter controls, and two assignable function buttons. Furthermore, there is a media slot, ARRI Rosette mount, and a fan intake vent.

The other (assistant side) of the camera seems to be more complex with a handful of buttons around an LCD screen, the on/off switch, the record start/stop button, and all the camera I/O connectors – and oh boy, is there a lot of them. We can see three SDI inputs, a USB-C, GENLOCK SDI, 19.5-34V DC-IN, two AUX, CTRL, timecode, GIG-E, Audio, 3.5mm headphone jack. Additionally, on the camera’s front side, there are two three-pin Lemo (24V RS 3A MAX) connectors, a 12V AUX-3 1A MAX two-pin Lemo, and an EVF SDI output.

RED is presenting the XL as being an all-in-one system suited for studio configurations and high-end productions. In one of his Instagram posts, Jarred Land commented that the image sensor in the XL is the same as the one in the regular V-RAPTOR – the 8K Vista Vision 8192 x 4320 (sensor size 40.96mm x 21.60mm, diagonal 46.31mm). Hopefully, the XL will not suffer from the same vertical line stitching issue as the V-RAPTOR, which will receive a fix in form of a flare guard directly from RED.

The fact that the V-RAPTOR XL was displayed at the BSC Expo does not mean much by itself. Though we don’t know the exact release date, it might be getting close. As expected, there is already a discussion about the XL going on over on the Reduser forum in this thread.

The only information we currently have on the availability of the RED V-RAPTOR XL is that it will come in 2022. The price should be $39,500 according to RED (I assume that will be for the brain only). For reference, the “regular-sized” RED V-RAPTOR currently sells for $24,500 (brain only).

Do you use the RED V-RAPTOR or Komodo for your video work? What do you think about the upcoming V-RAPTOR XL? Let us know your thoughts in the comments section underneath the article.

Nikon Z9 Update is So Big, It Could Have Been a Whole New Camera