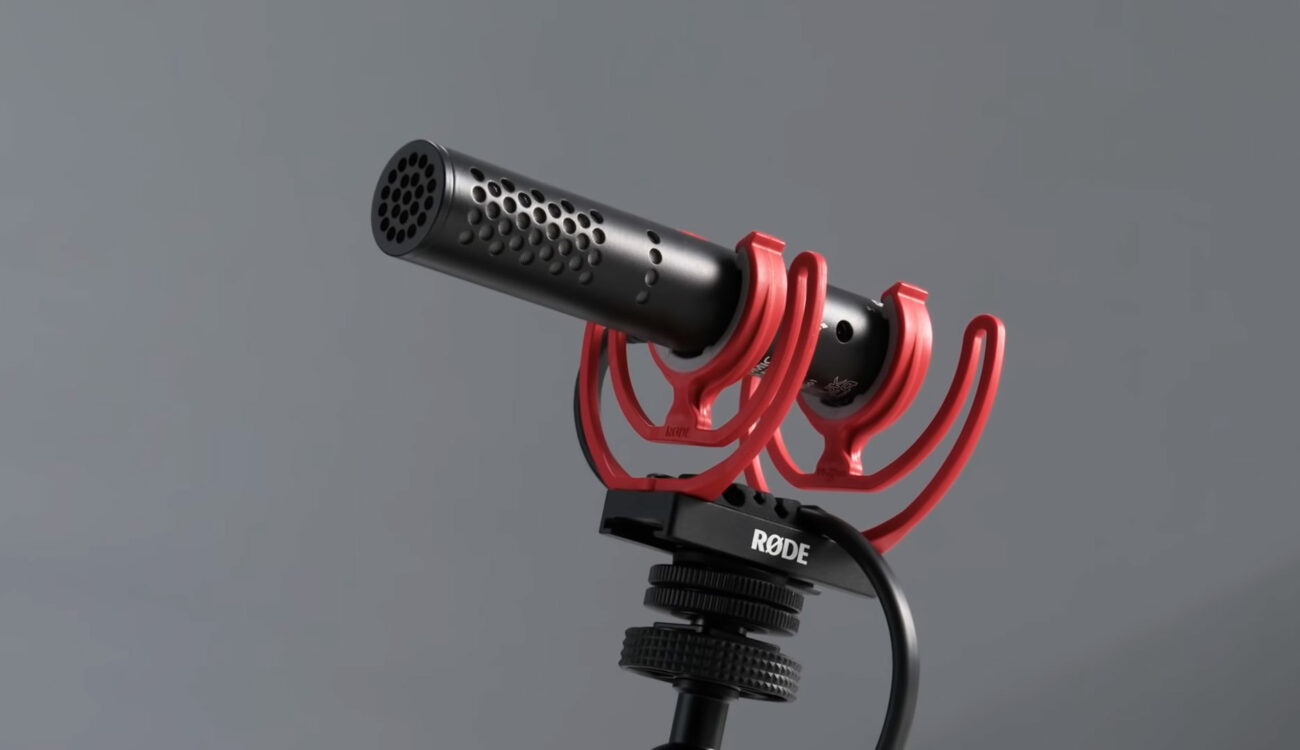 RØDE VideoMic GO II is a new compact and lightweight shotgun microphone for use on cameras, mobile devices, or with USB-equipped computers. Powered straight from the 3.5mm TRS or USB-C cable, its design was inspired by the VideoMic NTG. The VideoMic GO II is available now for pre-order from $99 (including foam windscreen, shock mount, and 3.5mm TRS cable).

The VideoMic series of microphones from the Australian company RØDE is perhaps the most popular on-camera shotgun mic product line for filmmakers out there. Back in 2011, the original RØDE VideoMic was my first on-camera microphone. In November 2013, RØDE released a more compact version of the VideoMic that did not require any battery and they decided to simply call it VideoMic GO. That’s right – the first VideoMic GO is already over 8 years old. About time we got a new generation – let’s take a look at the newly released RØDE VideoMic GO II.

The new VideoMic GO II is being marketed by RØDE as a smaller, simplified version of the VideoMic NTG which is currently one of the most popular on-camera shotgun mics. The VideoMic GO II is designed to work with cameras, portable recorders, iOS, and Android mobile devices, as well as USB-equipped computers. The microphone utilizes a super-cardioid polar pattern to focus on the sound in front of it while attenuating other sounds from the sides and rear.

RØDE claims the VideoMic GO II offers focused directivity, low noise, and isolation from external vibrations. When used as a USB microphone, the 3.5mm jack functions as a headphone output for monitoring the live signal or playback from the host device. The mic does not require any battery – it runs on plug-in power from the TRS 3.5mm connector or from the USB-C port. There are also no controls or switches on the body and the microphone weighs only 33g.

Difference from the first VideoMic GO

Compared with the original VideoMic GO, the second generation received upgrades to the body, shock mount, and cable, plus the ability to operate as an analog or digital USB microphone. Just like the VideoMic NTG, the VideoMic GO II’s body features acoustic perforations rather than the linear slots traditionally used in shotgun microphones. RØDE says this helps deliver transparency and a natural, uncolored sound.

When it comes to connectivity, a detachable 3.5mm TRS cable wired in a dual-mono configuration is supplied to connect to the camera. Additionally, there is a USB-C port directly on the microphone’s body to connect it to any USB-C device for direct recording. The microphone’s integrated analog-to-digital converter operates at 24-bit / 48 kHz. The USB-C cable is not included – you can purchase the RØDE SC16 for instance.

The VideoMic GO II is also officially MFi-certified, unlocking complete compatibility with Lightning-equipped iOS devices, including iPhone, iPad, and iPod. For this connection, you will need to purchase the RØDE SC15 USB Type-C to Lightning accessory cable (available separately).

The microphone sits in a Rycote Lyre suspension-style shock mount for attachment to a camera or boom pole that inhibits the transfer of vibrations from the camera. The shock mount sliding rail system lets users shift the position of the mic forward or backward. The mount also features built-in cable management to help keep the cord run orderly.

The VideoMic GO II includes a simple foam windscreen (with a huge RØDE logo on the side, of course :)) to minimize unwanted wind noise from light breezes, fans, heaters, and air conditioners. For additional reduction of wind noise in outdoor environments, you can buy a furry windshield RØDE WS12 for the microphone (available separately).

The good news is that VideoMic GO II can be fully integrated with RØDE Connect software, allowing users to capture audio for IRL streaming, record podcasts, and more.

The RØDE VideoMic GO II is available now for pre-order. The price for the microphone (plus foam windshield, shock mount, and TRS cable) has been set to $99. RØDE also sells the microphone bundled with the WS12 windshield for $128. Finally, you can also buy the mic in a kit with a 7′ (213cm) lightweight boom pole and extension TRS cable for $191. Separately, the RØDE WS12 costs $29.

Which on-camera microphone do you use for your video work? What do you think about the new VideoMic GO II? Let us know your thoughts in the comments section below.

More than just the Canon EOS R5C will be announced on January 19, 2022 | Canon Rumors

This is the free app ISS astronauts use for Earth photos