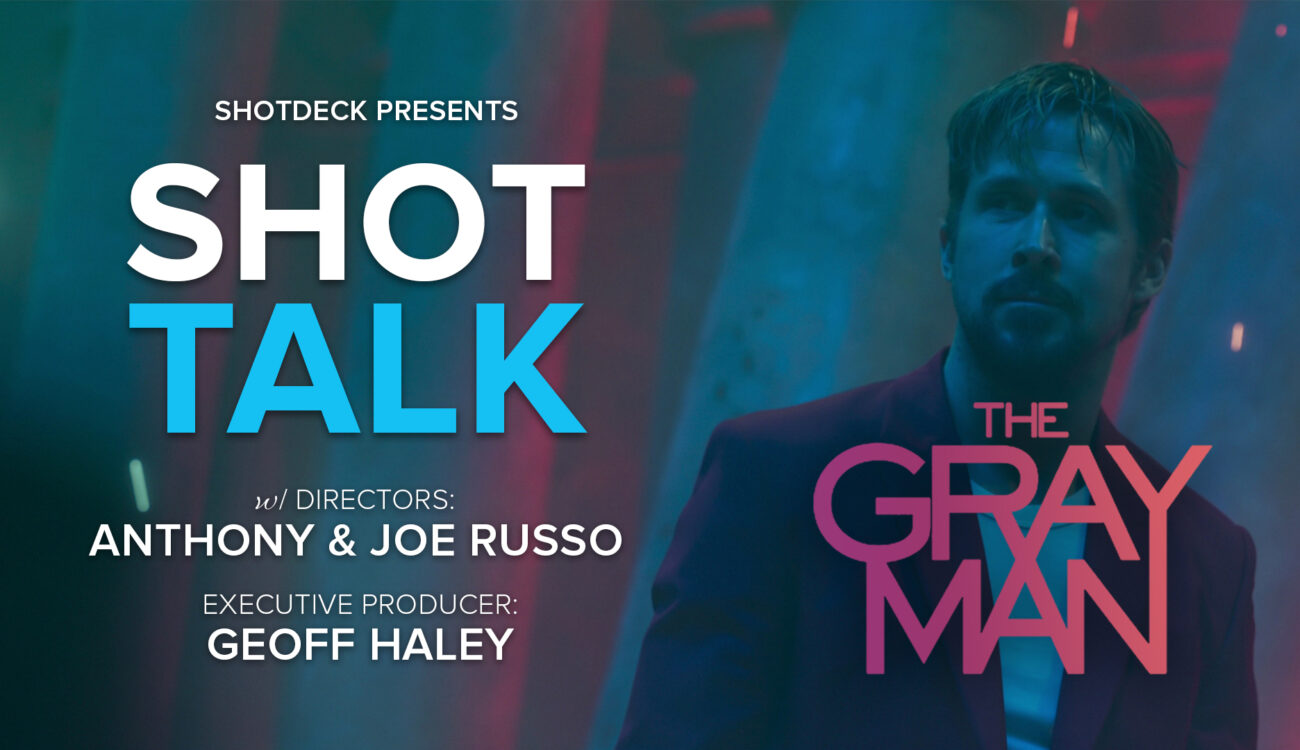 In a recent episode of Shot Talk, an interview series from ShotDeck, cinematographer Lawrence Sher, ASC, talks with the Russo Brothers and camera operator / executive producer Geoff Haley about their latest feature, “Gray Man”, and how ShotDeck helped them navigate the important prep phase of said film.

Prepping for a feature film is complicated. You have to get all the key collaborators together, talk for hours about all sorts of things related to the look and feel, the locations of the film, discuss camera packages and other technical details, share some visions, discard others… it takes time. And to illustrate a certain look you have in mind, well, a picture is worth a thousand words, as they say.

And that’s where ShotDeck comes in handy (check our previous coverage here). In simple terms, it’s the largest database of still images taken from thousands of movies. It’s fully searchable, and every single still image is tagged with all sorts of attributes: Color, tone, feel, angle, camera used, etc.

According to the Russo Brothers and Geoff Haley, ShotDeck played an essential role in finding specific looks for a particular scene or location in their film. Check out the entire conversation below, it’s a fascinating one and offers some deep dives into their approach to a particular scene.

Shot Talk on “The Gray Man”

Geoff Haley, A-Cam and Steadicam operator (plus executive producer) on “The Gray Man,” talks about using ShotDeck as inspiration for certain looks. In particular, when the idea came up to use a two-tone look far certain scenes, where one color would be in the warm spectrum while its counterpart would be more cool.

He found some interesting stills from the end of “Children of Men”, where a rowboat on a very gray and dark sea is approaching a red glowing beacon. That was exactly the look they were going for!

But the talk also contains some masterclass-like insights into how to pull off certain lighting situations, for example. The fireworks’ scene is one such example, as Lawrence Sher points out that it must have been extremely complicated to match the lighting effects inside to the CGI background outside the windows that was added later.

The solution was to build huge rigs in the shape of trees that contained a vast number of LEDs that could be programmed to simulate fireworks. In post-production, these rigs were then painted out and the CGI fireworks were placed to match the lighting effects… neat!

In addition, the extensive use of FPV drone footage in this film is very noteworthy. Johnny Schaer (johnny_fpv on Instagram) piloted the drone on a number of shots used both for coverage and to transition from one scene to the next. In one impressive example, an FPV shot was blended into a Steadicam shot executed by Geoff Haley, forcing you to jump right into the action, no classic establishing shots ’round here.

The talk goes on into various details on the film and I really encourage you to watch the whole thing, it’s really interesting!

In case you’re interested in ShotDeck, the service is subscription based and costs around $99.95 / year (or $12.95 / month), but there are discounts for students as well. Check their site for details.

Do you use ShotDeck for your projects? What about “The Gray Man”, would you watch it? Share your experiences in the comments below!

How to Take Your Passport Photo at Home in 2022