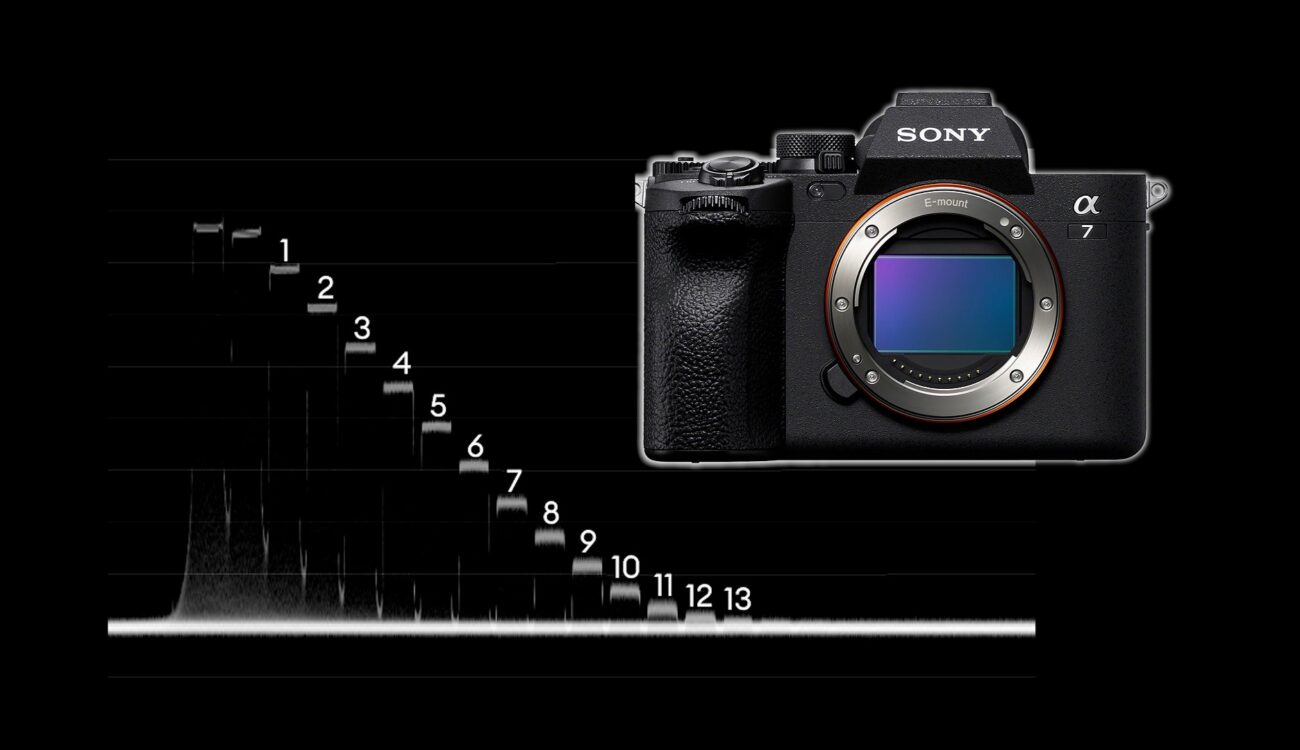 The Sony a7 IV is soon to be released. A production model is already on our desk, so we seized the opportunity to “torture” it in our lab – no mercy as usual! And for the record, it did not disappoint us. Interested to hear more? Here is our Sony a7IV lab test.

As some of you might have read in earlier posts of mine, I owned a Sony a7S II for quite a few years, and also borrowed the grab & go cam from CineD, a Sony a7 III quite frequently as a B cam. So whenever I can get my hands on a new Sony Alpha cam, I am quite excited!

Back then the Sony a7 III felt like the perfect middle ground of the Sony Alpha series cameras in terms of price/performance ratio. So will the Sony a7 IV again fit into this role? Let’s have a closer look at how the lab testing plays out …

Rolling Shutter of the Sony a7 IV

In APS-C crop mode, the rolling shutter in UHD becomes quite a bit better at 13ms.

If you are interested in our procedure and learning how we test dynamic range, please head over here.

The Sony a7 IV features a 33-megapixel sensor, but only allows video recording at 3840×2160 UHD full-frame mode as the maximum resolution and that’s where Dynamic Range results get interesting.

Sony claims on its webpage that the camera downsamples UHD from the full 7K sensor – hence the image should show rather good dynamic range results as downscaling reduces noise hence improving the signal-to-noise ratio (SNR).

Looking at the waveform of our Xyla 21 stepchart, we see about 13 stops above the noise floor:

By the way, a very similar result is obtained from the Sony A1 if the 3840×2160 full-frame mode is selected – also here the sensor is properly downsampled.

I’m impressed! Those are really good results from the Sony a7 IV! Just keep in mind, much of it is achieved by downsampling and significant noise reduction in camera which cannot be turned off. If you look at the IMATEST result, in the middle graph above the blue SNR = 1 line designated with “14” you can see about 1 additional stop before the signal differentiation is gone. If you compare that with our benchmark for dynamic range, the ARRI ALEXA LF (lab test here) you can see in the very same IMATEST graph above the blue “14.7” line (14.7 stops for SNR = 1) some additional 3 stops. Those would be accessible by using noise reduction in post with the ARRI camera. Hence, the Sony a7 IV has in total about 3 stops less dynamic range than the ARRI ALEXA LF. This is also confirmed by the latitude tests below.

Latitude Test with the Sony a7 IV

Latitude is the capability of a camera to retain colors and detail when over or underexposed. For our latitude test we have a standard setup with fixed studio lights and a fixed distance between subject and lights, and subject and rear wall.

We start to expose the camera at 1/25s shutter speed at T1.5 and adjust the studio light such that the forehead of my colleague Johnnie is at the cusp of clipping. From there we successively underexpose the scene by adjusting the iris of the Zeiss Compact Prime 85mm T1.5 from F1.4 to F2, F2,8, F4, F5.6, and F8, and from there onwards we adjust the shutter speed to 1/50s, 1/100s and1/200s. This way we cover a latitude of 8 stops.

To give you a point of reference, our base exposure scene in the studio reflects a luma value of about 60% (ungraded) at Johnnie’s forehead.

Now let’s see how the camera reacts to 3 stops overexposure, pushed back to our baseline:

Johnnie’s forehead is at the cusp of clipping, several patches of the color checker have been clipped already. Interestingly, the image is a bit blueish, cooler when compared to our base exposure.

Not much happens when we successively underexpose our image from 2 stops over to 3 stops under, pushed back to base exposure.

Now, at 4 stops underexposure, things get interesting as all of a sudden quite some luma & chroma noise starts to show up:

Also, the image gets a slight pinkish tint this time. But still, all is good. Of course, you can further reduce the noise in postproduction if you like:

At 5 stops underexposure (from our base), all of a sudden heavy pinkish chroma noise is all across the image:

The image breaks down – we went too far, as the shadows are drowned in pink chroma noise which cannot be removed by noise reduction:

Using temporal and spatial noise reduction in DaVinci Resolve 17.4.1 with emphasis on chroma noise reduction still cannot save the image, as the noise is not finely distributed. It shows larger blotches of pink chroma noise instead – have a look at the shadow side of Johnnie’s face for example. In general, noise reduction in postproduction with the Sony a7 IV is a risky business, as those larger blotches of noise turn into larger, plasticky-looking monochrome areas. The rest of the image is OK – no horizontal or vertical stripes are visible, but I cannot tolerate pink shadows, especially on faces. Sorry.

And that leads to a similar conclusion that we had for the Sony a7S III – around 7 stops of exposure latitude are possible. The Sony A1 was 1 stop better in that regard – the pink shadows on Johnnie’s face showed up one stop later, at 6 stops of underexposure, pushed back to base.

Also, the Panasonic LUMIX S1, S5, and S1H are capable of 8 stops of exposure latitude – the noise is finely dispersed, making it easier to remove with noise reduction in post. Clearly, Panasonic has the better image processing pipeline here.

And last but not least, just to mention the current benchmark, the ARRI ALEXA LF achieved 10 stops of exposure latitude in our standard studio scene (lab test here).

The Sony a7 IV shows overall very strong results in the lab test – really good dynamic range, 12.9 stops at SNR = 2! Rather good exposure latitude with 7 stops. But the rolling shutter falls a bit short unfortunately, it is on the high end at 26.8ms, also in comparison to the Panasonic LUMIX S1, S5, and S1H, the Canon EOS R5, and the Sony A1 and a7S III full-frame cameras.

Are you considering the Sony a7 IV as a solid middle-ground full-frame camera? Have you shot with it already? If yes, tell us more in the comments section below.