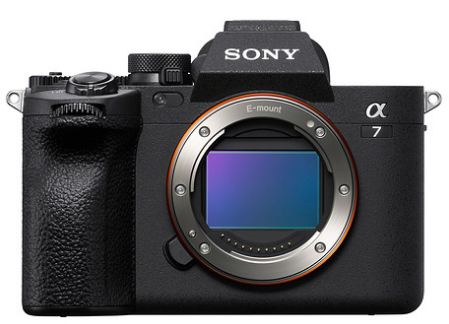 Sony finally announced the new Sony A7 IV camera today. the camera features a newly developed 33 MP  Exmor R BSI CMOS Sensor. Optimized video, optimized sensitivity, optimized speed, the Sony Alpha a7 IV raises the bar for what a full-frame mirrorless camera is capable of. The new A7 IV uses a BIONZ XR processor, the same image processor we have seen in the Sony in the A7S III camera, which offers a whopping 15+ stops of dynamic range as well as the new A7 IV processor is 8x more processing power than the BIONZ X processor found in the A7 III.

Both cameras feature the same High ISO range up to 204800, but due to the new image processor with a new image decoding algorithm as well as a new higher-resolution sensor on the board we will get more details with less noise in the new Sony A7 IV camera compared to the Sony A7 III.

10 Bit internal recording is one of the key eye-catching features of the new Sony A7 IV camera, and that is why it becomes a perfect companion for a filmmaker too looking for a perfect Mid-range Mirrorless camera. 4K/30p video is oversampled from 7K, but unfortunately 4K/60p is oversampled from 4.8K in the APS-C Super 35 mode. So when shooting in 4K at 30p, the camera utilizes the full width of the image sensor to oversample from 7K’s worth of data, but at 60p, a 1.5x crop is applied.

Sony has done a lot of work in improving the AF mechanism of the camera, although the number of Hybrid AF points is slightly improved but we do have a major change in Sony A7 IV It also has the recent focusing algorithm that’s the same as the one used by the recently released A7S III, we also have a major upgrade in the buffer memory of the Sony A7 IV camera when shooting Raw files, being able to shoot at 10fps for up to 830 JPG+RAW images in one high-speed burst.

The Sony A7 IV is a very impressive camera and we do hope and expect it will create a major impact on the Fullframe mirrorless market.

The Alpha 7 IV takes “basic” to the next level for full-frame cameras with excellent image quality and performance, redefining the lofty standards set by the acclaimed Alpha 7 III. The new model features many of Sony’s most advanced imaging technologies, including the latest BIONZ XR™ processing engine and advanced AF (autofocus) capabilities from the flagship Alpha 1 combined with streamlined operability and enhanced reliability for photos and movies, making it the perfect all-around camera for today’s imaging enthusiasts and professionals. The Alpha 7 IV also boasts a 33MP (approx., effective) image resolution, rich movie expression and various features to support the growing demand for remote communication, bringing new meaning to what a “basic” camera can accomplish.

“Since its introduction over three years ago, the Alpha 7 III has made tremendous impact in our industry, completely redefining the expectations for what can be accomplished with a ‘basic’, or entry-level full-frame camera,” said Yang Cheng, Vice President, Imaging Solutions, Sony Electronics Inc. “Now, it’s time to break through all existing boundaries again. The Alpha 7 IV brings together the best of Sony imaging technologies in both photo and video to deliver a high-end experience to a wider range of customers. This gives today’s creators a new level of freedom to capture, create and share in ways that they’ve never been able to before, no matter the situation in which they find themselves.”

The new Alpha 7 IV is an exceptional hybrid camera packed with outstanding still image quality and evolved video technology with advanced autofocus, enhanced operability and improved workflow capability. The model was developed with the environment in mind by using Sony’s original recycled plastic SORPLAS™ for the camera body and packaging with recyclable  materials and less plastic.

The latest BIONZ XR™ processing engine is the same that is used in Sony’s flagship Alpha 1, delivering high-speed AF, uninterrupted continuous shooting up to 10fps with AF/AE tracking and a large buffer for a prolonged shooting experience. The Alpha 7 IV tracks subjects with tenacious Real-time Tracking and 759 phase-detection AF points in a high-density focal plane phase-detection AF system that covers approximately 94% of the image area. Additionally, for the first time, Real-time Eye AF can now track birds’ and animals’ eye for both still images and movies, in addition to humans. The Alpha 7 IV also has face and eye detection accuracy for humans that is improved by approximately 30% compared to the Alpha 7 III.

To meet the growing need for precise autofocus performance when shooting videos, unique AF features are achieved when using the Alpha 7 IV with a Sony E-mount lens, including AF Assist that supports focus transitions when using AF, and Focus Map that visualizes depth of field. For the first time in the Alpha series, the new camera features Breathing Compensation to combat focus breathing and maintain a consistent angle of view throughout focus changes and can be switched on or off.

The Alpha 7 IV is a hybrid still and video camera with outstanding operability and reliability that easily allows the user to switch from photo to video and back at their convenience. New to Sony’s lineup of Alpha cameras is a dual-layer mode dial, with a lower layer for selecting Still/Movie/S&Q and a top layer for Auto/P/A/S/M and MR (Memory Recall), enabling users to quickly select and switch between the dedicated settings. It also has 5-axis optical in-body image stabilization for a 5.5-step[v] shutter speed advantage, an improved grip for greater comfort, and a CFexpress Type A compatible media slot to support media with faster writing and clearance. Additionally, the 3.68 million-dot (approx.) OLED Quad-VGA viewfinder is 1.6 times the resolution of the Alpha 7 III viewfinder, benefiting users with an upgraded live-view image quality that minimizes false color and increases resolution.

The Alpha 7 IV body is built with magnesium alloy to achieve a robustness while minimizing its weight. In addition, the redesigned structure and lens lock button contribute to enhanced dust and moisture resistance.

By offering a variety of connectivity options, the Alpha 7 IV enables on-the-spot streaming and sharing of high-quality content to meet the growing need for remote communication in real-time without sacrificing excellent image and sound quality. The connection between the camera and Imaging EdgeMobile™ application[viii] is simplified via Bluetooth, and fast data transfer is possible by 5GHz/2.4.GHz Wi-Fi.

The camera also has a new feature called “Shot Mark” to enable easy access to the marked scenes in a video clip, within camera and on Sony’s Catalyst Browse/Prepare applications.[ix]

Moreover, the camera has a range of new features to support live streaming and remote communication without needing dedicated software. UVC (USB Video Class) and UAC (USB Audio Class) turn the Alpha 7 IV into a high-performance live streaming camera when connected to a computer or smartphone[x]. High image quality such as 4K 15p and 1080 FHD 60p deliver realistic video for remote sharing and the Alpha 7 IV’s digital audio interface can be paired with a range of mics and accessories to deliver high quality sound.

Finally, Sony plans to offer a new cloud service next year, “AI Video Editing Studio”, for automated editing with AI technology. To allow creators to focus on more creative tasks, “AI Video Editing Studio” automatically performs initial editing in the cloud, using AI technology. Sony will continue to strive to offer a wide variety of imaging experiences and services through the active integration and advancement of cameras, cloud and AI.

Designed with the Environment in Mind

In line with Sony’s environmental efforts based on the “Road to Zero” initiative, environment was an important factor in the development of the Alpha 7 IV’s design, production and packaging. The camera uses recycled plastic, SORPLAS™, which does not depend on non-renewable resources and is produced at the sites by using renewable energy such as solar power generation. The product packaging also adopts recyclable plastic-reduced materials.

The HVL-F60RM2 with GN 60 and 20-200mm coverage and HVL-F46RM with GN 46 and 24-105mm are powerful wireless flashes to offer precise control, enhanced high-speed and intuitive operability. They are designed to meet the needs of both professional and advanced content creators when shooting with a Sony Alpha camera, including the Alpha 7 IV, to offer the ultimate Alpha Lighting System by the detailed communication between cameras and external flash.

When used in combination with an Alpha camera, they allow users to experience the unique communication and system benefits of the Alpha Lighting System that sets a new standard for mirrorless camera lighting systems. For example, with the Alpha 7 IV, P-TTL flash control metering for every frame in Mid, and Hi continuous mode has become possible in addition to Lo continuous mode. The flash release time lag is also shortened to capture momentary facial expressions and movements of the subject.

With the Alpha 1, the HVL-F60RM2 achieves a phenomenal up to 20fps of continuous shooting and approximately 20 flashes per second can be produced for more than 10 seconds with the external flash battery adapter FA-EBA1 (sold separately). When the Alpha 1 is used with Sony’s flashes, including HVL-F60RM2 and HVL-F46RM, users can sync up to 1/400 second shutter speed to expand expressive capabilities when shooting in full-frame mode. In addition, with the silent electronic shutter of the camera, silent flash shooting is possible when absolute silence is required.

Other system benefits of HVL-F60RM2 and HVL-F46RM with an Alpha camera include:

“Visual Story” is a mobile application for professional event photographers and video creators to enable immediate and automatic delivery of photos and movies  to their clients after an event through gallery creation, utilize AI (artificial intelligence) assistance for easy image selection, upload assets online and more. While the Visual Story app is already available to iOS users, Android user can now also take advantage of the benefits Visual Story provides to professional photographers and videographers.

When using the Alpha 7 IV, “Shot Mark” is also supported by Visual Story on iOS Version 2.1.

The new HVL-F46RM will be available in November 2021 for approximately $400.00 USD and $550.00 CAD. It will be sold at a variety of Sony’s authorized dealers throughout North America.

The new HVL-F60RM2 will be available in November 2021 for approximately $550.00 USD and $750.00 CAD. It will be sold at a variety of Sony’s authorized dealers throughout North America.

Save $300 on this MSI gaming laptop - Early Black Friday deal