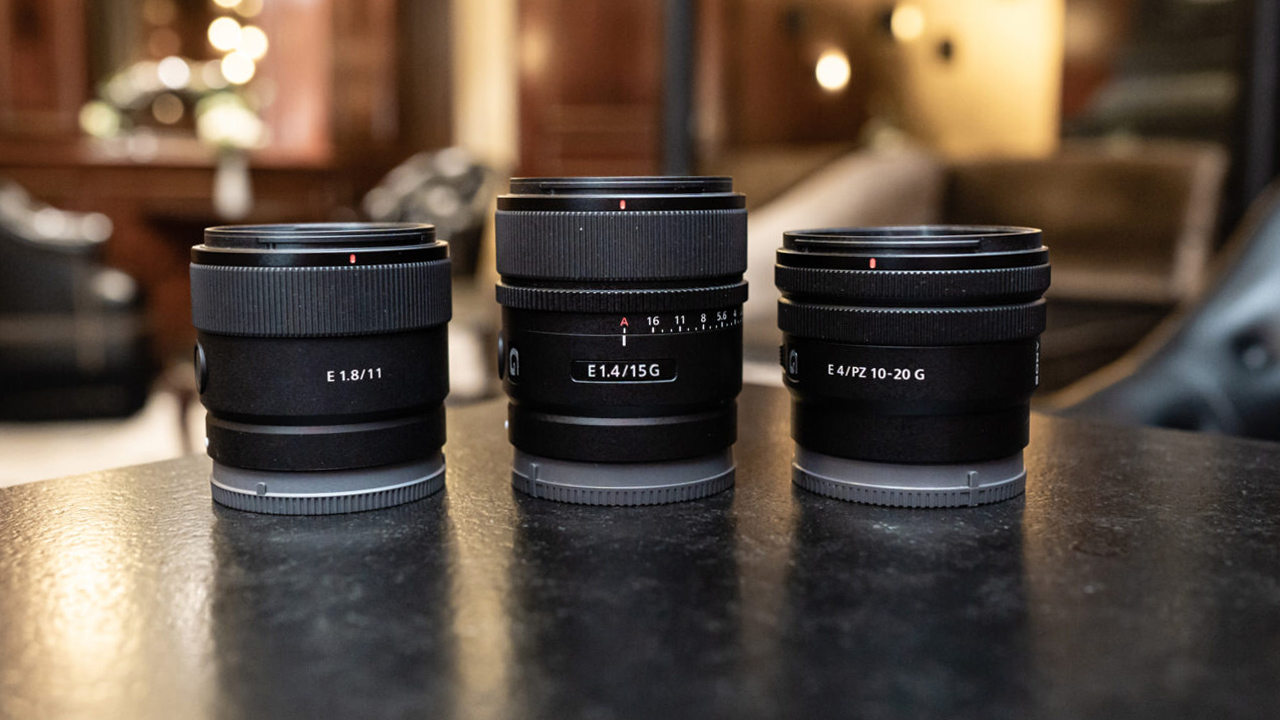 Although Sony has completely revolutionized the industry with their full-frame Alpha series models, this product release proves that the company really cares about the needs of entry-level customers who put their trust into the Sony APS-C lineup.

Before we dive into the specs of each single lens, let’s take a look at what they share. First off, all three lenses were designed with lightness and compactness in mind. Indeed, their weight ranges from 178g for the E PZ 10-20mm F4 G (which is quite impressive for a Power Zoom lens!) up to 219g for the super fast Sony E 15mm F1.4 G.

Moreover, Sony claims that all lenses offer great AF performances when shooting both stills and videos. Along with their minimal weight, this aspect makes them particularly suitable for v-loggers who often need to film themselves while holding the camera for extended periods of time.

In developing these new models, the company also focused on weather-sealing and operability. In fact, all lenses have a dust and moisture-resistant design, which offers extra peace of mind when shooting in harsh environments and under inclement weather. Moreover, all lens barrels are equipped with a Focus Mode switch (AF/MF) and a customizable Focus Hold button.

The new Sony E PZ 10-20mm F4 G is a featherlight Power Zoom lens that fits in the palm of your hand. At only 178g, it is approximately 20% lighter than the existing Sony E 10-18 F4 OSS. The lens can host 62mm filters on the front via a filter thread.

Its constant aperture of f/4 across the whole zoom range should deliver a round, smooth bokeh. The optical design features 3 aspherical elements, two ED (Extra-Low Dispersion) elements, and a single ED aspherical element. According to Sony, this choice should help keeping both optical and chromatic aberrations down to a minimum.

Both the zoom and focusing mechanism have an all-internal design. Hence, the length of the barrel will not vary when zooming in/out or changing focus distance. By the way, the minimal focus distance of the lens is 0.2m when AF is enabled and 0.13-0.17m when focusing manually. Users can zoom using either the zoom ring or a dedicated lever on the lens body, and zoom speed is also adjustable.

The Sony E 15mm F1.4 G is the fastest lens in this trilogy, packing a wide aperture of f/1.4 in a very compact body (66.6×69.5mm). This should be a great ally in low light scenarios and should also result in a nice subject/background separation. Its minimum focusing distance of 0.17m will also enable users to achieve interesting wide-angle close-ups.

Along with a the focus ring that supports Linear Response MF, the lens comes with a manual iris ring and an aperture click switch that offers two different settings (ON/OFF). When set to ON, the lens will provide a tactile feedback when manually changing the f-stop number, while the OFF setting should ensure continuous, smooth iris pulls.

The lens has 3 aspherical elements, one ED element, and a single Super ED element to reduce distortion, increase sharpness, and keep chromatic aberration under control. According to Sony, focus breathing should be minimal and can also be compensated for on supported camera bodies.

Finally, the company introduced an ultra-wide prime option, the Sony E 11mm F1.8. According to Sony, this new entry should deliver edge-to-edge sharpness, even when shooting at f/1.8.

The lens is extremely compact, measuring only 66mm in diameter and 57.5mm in length, and weighs a few grams more than the E PZ 10-20mm F4 G (181g). A big selling point of this model is its front filter thread (55mm), a not-so-common feature on extremely wide-angle lenses.

Like its two siblings, the Sony E 11mm F1.8 has an all-internal focusing mechanism and comes with 3 aspherical and 3 ED elements for optimal image quality. The lens has a very simple design overall and supports Linear Response MF for precise focus operations. The lens can focus as close as 0.12m.

Do you own an E-mount cropped sensor camera? What do you think of these new Sony wide-angle options for APS-C bodies? Let us know your thoughts in the comment section down below!