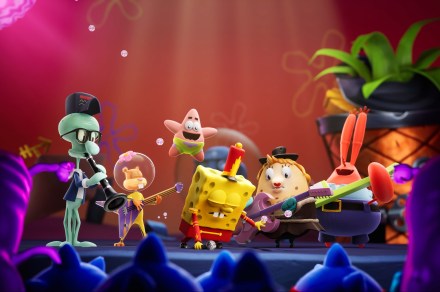 SpongeBob SquarePants: The Cosmic Shake got a new gameplay trailer during THQ Nordic’s 2022 digital showcase, giving a better sense of how the platformer plays.

The game follows SpongeBob and Balloon-Patrick as they get their hands on fortune teller Kassandra’s Mermaid’s Tears, which have the ability to grant wishes. They both make a few wishes and as a result, the fabric of the universe falls apart. SpongeBob and Patrick are able to travel to seven areas called Wishworlds, including the Prehistoric Kelp Forest, Wild West Jellyfish Fields, and Halloween Rock Bottom.

The gameplay trailer shows SpongeBob and Patrick traversing through the different worlds and their platforming sections. There’s even a seahorse that SpongeBob can ride, much like how other games, such as Elden Ring, have rideable horses.

Throughout the game, there are plenty of homages to the TV show. SpongeBob can channel his karate spirit and kick enemies, as well as put on costumes including SnailBob and SpongeGar. The characters in the game are voiced by their original voice actors from the show.

A January 24 release would put the game right in the middle of an increasingly packed start for the next year. The Dead Space remake releases the day before on January 23. Forspoken would share the same launch day as our spongey friend, assuming it won’t be delayed again, as it has already been twice.