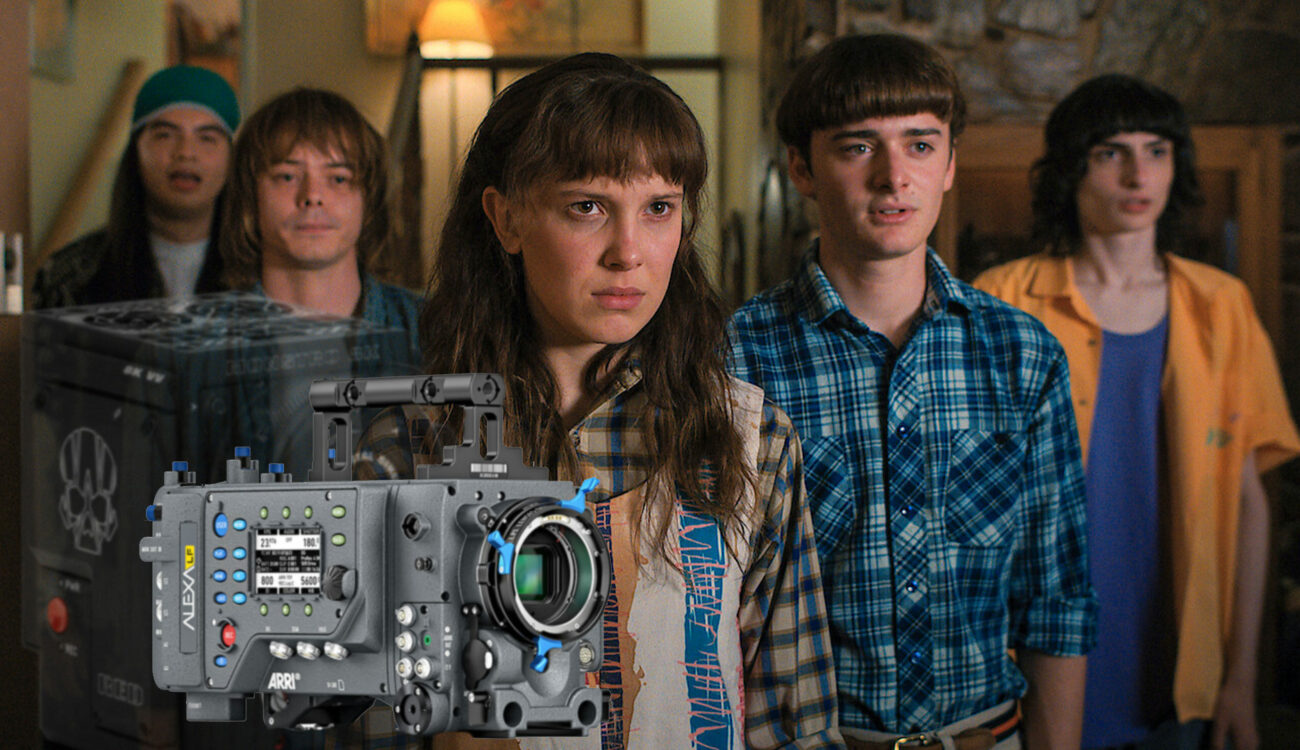 In a recent interview for Filmmaker Magazine, DP Caleb Heymann (Fear Street trilogy) talks about shooting Netflix’s Stranger Things season four for the Duffer brothers. He explains why the show moved from RED Monstro with Leica lenses to ARRI ALEXA LF with a mix of vintage glass from the ’60s. Caleb also talks about how COVID affected production, and how they lit certain scenes and performed longer “oner” shots.

Stranger Things has been without a doubt one of Netflix’s hottest TV shows in recent years. The series came back this year with the penultimate season four. While the story definitely is what drives every show, there are also a few interesting technical background stories that we, as a cinema tech news and reviews site, are interested in. After the original DP Tim Ives did not return to the show this time, the fourth season’s cinematography work was shared by three DPs – Caleb Heymann, Brett Jutkiewicz, and Lachlan Milne.

In a recent interview for Filmmaker Magazine, Caleb (who shot seven of the nine episodes) talks about working on the show for the Duffer brothers. While I definitely recommend reading the whole interview over on the Filmmaker Magazine website, I decided to highlight the most interesting bits in my article here.

When it comes to the choice of camera for the fourth season, Caleb talks about the move from RED cameras to ARRI ALEXA LF and explains why the first three seasons were actually shot with RED in the first place.

Originally, the decision to shoot RED for the show had a lot to do with Netflix’s 4K requirement. At the time in 2016, there wasn’t a 4K ALEXA option. That said, each season had been shot on a different sensor anyway. Season One was Dragon, Season Two was Helium, and Season Three was Monstro. So, three different flavors of the RED sensor.

Ultimately, after multiple testing sessions, the choice to go with the ALEXA LF was mainly about the camera’s highlight retention and how it handles color contrast in underexposure, according to Caleb. The classic Stranger Things LUT was also quite easily adapted to ARRIRAW. Caleb does not forget to add, however, that “what defines the look of the show has a lot more to do with the lighting and to some extent the lensing (rather than the camera choice)”.

Speaking of lenses, the previous seasons of the show were shot on Leica lenses, whereas for the fourth season, the team went for a mix of rehoused vintage lenses from the ’60s. As Caleb says, it was 12 primes in total – a mix of Canon and other lenses. The camera crew also got some rehoused Falcon primes from Camtec rental based out of L.A. Originally developed for Bradford Young for Solo, these primes are lightweight, small, and have a great close focus. Caleb’s favorite lens of the kit is the 45mm, as it has a certain dreamy look when shooting wide open. Furthermore, the crew also used Lensbabies for some of the hallucinatory moments with Eleven in the missile silo and in the Hawkins lab.

Generally, Caleb wanted to maintain the look and feel of the previous Stranger Things seasons by using wider focal lengths and therefore immersing the viewer more into the story. He says they shot a lot of scenes on 28mm and 35mm, which produces a really wide image on a large format sensor.

Lights, mood, and Spielberg’s letter to the Duffer brothers

When it comes to lighting, Caleb emphasizes how they played with color contrast between the deep orange of the sodium against the cool cyan of the mercury lights. As an example of this, he mentioned the night trailer park exteriors and interiors.

We further get to learn about the lighting in the opening scene of episode seven (a five-minute walk in the forest in the Upside Down), which was quite a task. Caleb says they used at least six Condors lighting the background and about 12 helium balloons to get the dark blue moonlight night/twilight look. There were multiple Arri SkyPanel 360s units with Vulture remote heads as well as SolaFrame 3000s with moving heads. This setup enabled the gaffer and the crew to control all the lights remotely from the ground.

With regards to the lighting and the color palette, the Duffer brothers definitely wanted to get back to a bit of a more retro, slightly bluer hue to the moonlight. They referred to a letter they’d gotten from Spielberg where, I guess amongst other things, he’d specifically mentioned loving their retro callback to that blue moonlight in the first season.

As Caleb puts it, for this season, the Duffer brothers wanted to move the camera more and do more “oners” (long shots including multiple scenes without any cut) and less coverage.

We really wanted to make use of moving masters, where the shot starts as one thing—a detail of a car whooshing by, a phone getting slammed—and then pivot around and develop into a medium two shot that might hinge into a profile closeup, then later pull out into a wide shot.

Caleb further talks about how he loved the challenge of performing shots that moved around 270 degrees or sometimes even a full 360, which were particularly tricky when it comes to lighting.

He also talks about how the COVID pandemic affected the shooting schedule, moved things around, and changed locations. It is, indeed, more challenging to make movies in these difficult times of worldwide restrictions that constantly keep changing. On the other hand, because the pandemic postponed the production of the movie, the Duffer brothers were able to finish the whole script before the shooting and kept adding interesting stuff and many VFX sequences. In a weird way, the pandemic therefore enabled us to receive such a spectacular season four of Stranger Things. Do you agree? I will certainly be re-watching season four soon to fully appreciate the cinematography aspect behind it.

Have you seen the fourth season of Stranger Things already? What are your thoughts about it? How do you like the look and mood of the show? Let us know your thoughts in the comment section underneath the article.

Until The Corn Grows Back