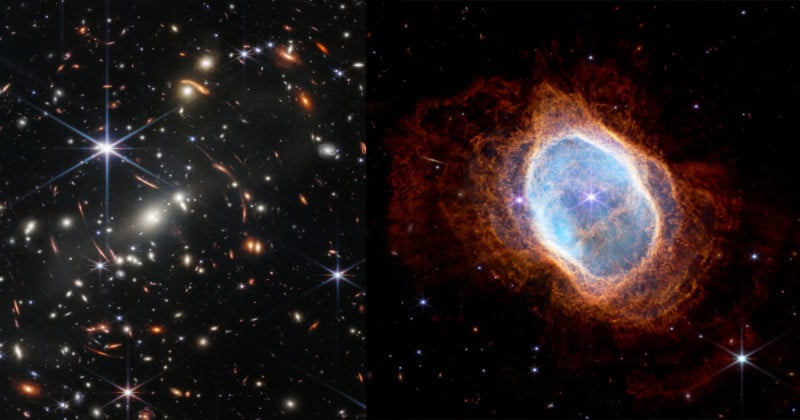 NASA has shared all five of the first full-color photos captured by the James Webb Space Telescope which demonstrate the full power of its imaging capability and officially kicks off its mission to unfold the infrared universe.

The five targets were shared late last week and, one by one, NASA has released the Webb Telescope’s view of these cosmic objects.

Yesterday, President Joe Biden shared the first of the five photos, a deep field image of the galaxy cluster known as SMACS 0723. The photo is extremely detailed and provides far more information than Hubble’s view of the same area of space.

The photo above is the highest resolution photo of deep space that has ever been taken and the light captured by Webb in this photo has traveled for more than 13 billion years.

“The image shows the galaxy cluster SMACS 0723 as it appeared 4.6 billion years ago. The combined mass of this galaxy cluster acts as a gravitational lens, magnifying much more distant galaxies behind it. Webb’s NIRCam has brought those distant galaxies into sharp focus — they have tiny, faint structures that have never been seen before, including star clusters and diffuse features. Researchers will soon begin to learn more about the galaxies’ masses, ages, histories, and compositions, as Webb seeks the earliest galaxies in the universe.”

WASP-96 b is a giant planet outside Earth’s solar system that NASA says is composed mainly of gas. The planet, located nearly 1,150 light-years away, orbits its star every 3.4 days. It has about half the mass of Jupiter, and its discovery was announced in 2014. 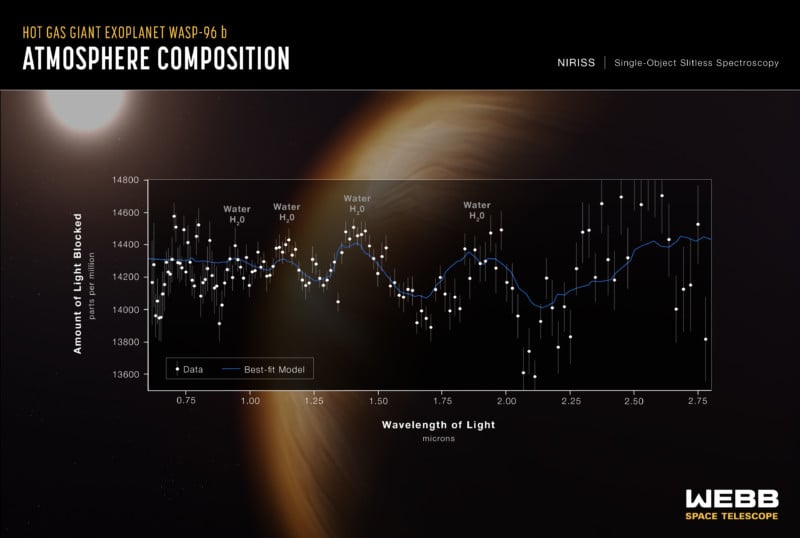 This observation covers infrared wavelengths of light that scientists have not had access to before Webb.

“NASA’s James Webb Space Telescope has captured the distinct signature of water, along with evidence for clouds and haze, in the atmosphere surrounding a hot, puffy gas giant planet orbiting a distant Sun-like star,” NASA says. 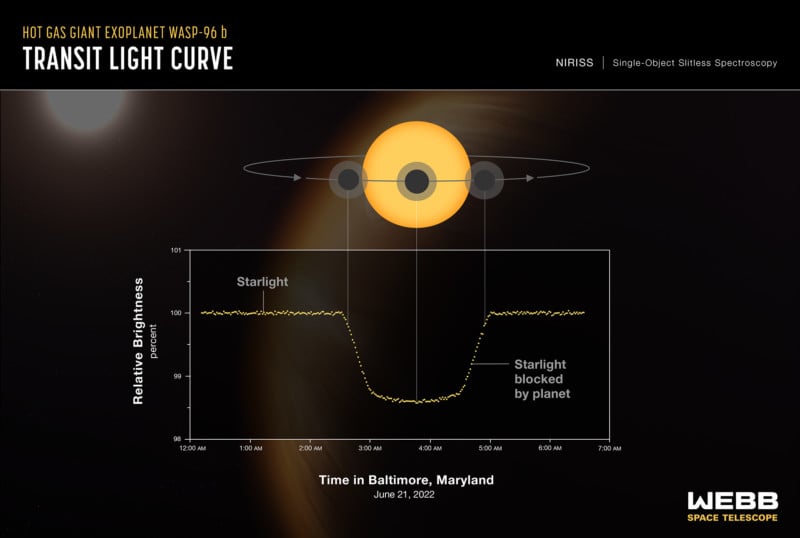 “The observation, which reveals the presence of specific gas molecules based on tiny decreases in the brightness of precise colors of light, is the most detailed of its kind to date, demonstrating Webb’s unprecedented ability to analyze atmospheres hundreds of light-years away. While the Hubble Space Telescope has analyzed numerous exoplanet atmospheres over the past two decades, capturing the first clear detection of water in 2013, Webb’s immediate and more detailed observation marks a giant leap forward in the quest to characterize potentially habitable planets beyond Earth.”

The Southern Ring Nebula, also known as the “Eight-Burst” nebula, is what is known as a planetary nebula: an expanding cloud of gas, surrounding a dying star. It is nearly half a light-year in diameter and is located about 2,000 light-years from Earth.

Webb has captured two separate views of the Southern Ring Nebula, both in mid-infrared and near-infrared.

“The bright star at the center of NGC 3132, while prominent when viewed by NASA’s Webb Telescope in near-infrared light, plays a supporting role in sculpting the surrounding nebula. A second star, barely visible at lower left along one of the bright star’s diffraction spikes, is the nebula’s source. It has ejected at least eight layers of gas and dust over thousands of years. But the bright central star visible here has helped “stir” the pot, changing the shape of this planetary nebula’s highly intricate rings by creating turbulence,” NASA explains.

“The pair of stars are locked in a tight orbit, which leads the dimmer star to spray ejected material in a range of directions as they orbit one another, resulting in these jagged rings. Hundreds of straight, brightly-lit lines pierce through the rings of gas and dust. These “spotlights” emanate from the bright star and stream through holes in the nebula like sunlight through gaps in a cloud. But not all of the starlight can escape. The density of the central region, set off in teal, is reflected by how transparent or opaque it is.

“Areas that are a deeper teal indicate that the gas and dust are denser – and light is unable to break free. Data from Webb’s Near-Infrared Camera (NIRCam) were used to make this extremely detailed image. It is teeming with scientific information – and research will begin following its release. This is not only a crisp image of a planetary nebula – it also shows us objects in the vast distances of space behind it. The transparent red sections of the planetary nebula – and all the areas outside it – are filled with distant galaxies. Look for the bright angled line at the upper left. It is not starlight – it is a faraway galaxy seen edge-on. Distant spirals, of many shapes and colors, also dot the scene. Those that are farthest away – or very dusty – are small and red,” the space agency continues.

“NASA’s Webb Telescope has revealed the cloak of dust around the second star, shown at left in red, at the center of the Southern Ring Nebula for the first time. It is a hot, dense white dwarf star. As it transformed into a white dwarf, the star periodically ejected mass – the shells of material you see here. As if on repeat, it contracted, heated up – and then, unable to push out more material, pulsated. At this stage, it should have shed its last layers. So why is the red star still cloaked in dust? Was material transferred from its companion? Researchers will begin to pursue answers soon. The bluer star at right in this image has also shaped the scene.

“It helps stir up the ejected material. The disk around the stars is also wobbling, shooting out spirals of gas and dust over long periods of time. This scene is like witnessing a rotating sprinkler that’s finished shooting out material in all directions over thousands of years. Webb captured this scene in mid-infrared light – which can only be observed from space. Mid-infrared light helps researchers detect objects enshrouded in dust, like the red star. This Mid-Infrared Instrument (MIRI) image also offers an incredible amount of detail, including a cache of distant galaxies in the background. Most of the multi-colored points of light are galaxies, not stars. Tiny triangles mark the circular edges of stars, including a blue one within the nebula’s red bottom-most edges, while galaxies look like misshapen circles, straight lines, and spirals.

“The dimmer star at the center of this scene has been sending out rings of gas and dust for thousands of years in all directions, and NASA’s James Webb Space Telescope has revealed for the first time that this star is cloaked in dust,” NASA adds.

“Two cameras aboard Webb captured the latest image of this planetary nebula, cataloged as NGC 3132, and known informally as the Southern Ring Nebula. It is approximately 2,500 light-years away.”

Stephan’s Quintet, also known as Hickson Compact Group 92, exists about 290 million light-years away, and four of the five galaxies within the quintet are what NASA describes as locked in a cosmic dance of repeated close encounters. This, too, was captured with in both near- and mid-infrared.

“Stephan’s Quintet, a visual grouping of five galaxies, is best known for being prominently featured in the holiday classic film, ‘It’s a Wonderful Life,’” NASA says.

“Today, NASA’s James Webb Space Telescope reveals Stephan’s Quintet in a new light. This enormous mosaic is Webb’s largest image to date, covering about one-fifth of the Moon’s diameter. It contains over 150 million pixels and is constructed from almost 1,000 separate image files. The information from Webb provides new insights into how galactic interactions may have driven galaxy evolution in the early universe.

“With its powerful, infrared vision and extremely high spatial resolution, Webb shows never-before-seen details in this galaxy group. Sparkling clusters of millions of young stars and starburst regions of fresh star birth grace the image. Sweeping tails of gas, dust and stars are being pulled from several of the galaxies due to gravitational interactions. Most dramatically, Webb captures huge shock waves as one of the galaxies, NGC 7318B, smashes through the cluster.”