The MSI MEG Z690 Godlike motherboard has a 3.5-inch screen, for some reason 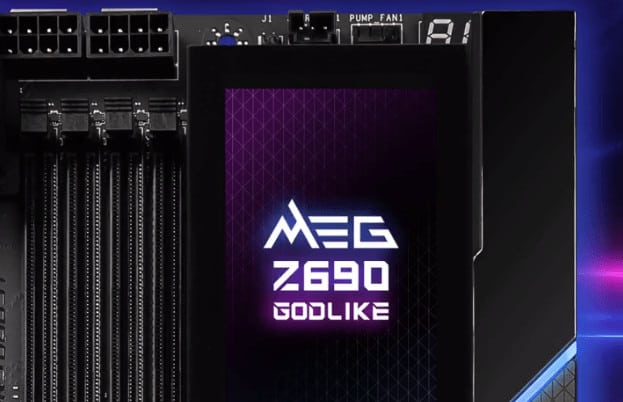 Famously the least cool thing inside your PC is the Motherboard. Though there have been some noted efforts in order to make them slightly cooler with shrouds, or unique color schemes over the years, the MSI MEG Z690 Godlike attempts to sell you on an expensive board that you probably don’t need, that happens to have a 3.5-inch screen on it. Sure, the E-ATX form factor is decent for some people looking to get the maximum performance if you’re overclocking or want to simply build an overpowered system. But the reality is that these boards might not impact performance in an incredibly meaningful way in the same way that a kit of fast, DDR5 RAM, a new CPU, or GPU might do. As an LGA 1700 board, it will be compatible with Alder Lake CPUs in addition to that blazing-fast DDR5 RAM that we previously mentioned.

The aforementioned 3.5-inch screen can be connected up via a type C header or port on your system, in addition to having features such as a clear CMOS, adjusting CPU clocks, OC, Safe Boot, Shutdown and restart functionality, which are all BIOS settings available on your motherboard.

You can also potentially set this up to perform such tasks as displaying the temperature of your GPU or CPU, or the name of the CPU and its associated clock speed if you’re so inclined. Regardless, it’s a neat bit of kit that’s also detachable if you do not wish to use the included USB-C Header on the board and instead just use a normal port instead for placement on your desk or otherwise. Regardless of the motherboard actually has an impact on gaming performance or not, it’s going to be interesting to see what the adoption looks like with this kind of motherboard, which admittedly has a decent amount of good features that you would come to expect from a high-end motherboard, and making those features easily accessible. However, something that we do not yet know is going to be the price of the motherboard as it’s sure to cost a pretty penny. Be sure to watch this space for more on this incredibly extra motherboard, as it’s a looker, but it remains to be seen if the price that MSI will inevitably demand from this board will ultimately be worth it for most gamers.

The post The MSI MEG Z690 Godlike motherboard has a 3.5-inch screen, for some reason appeared first on WePC | Let's build your dream gaming PC.

6 Factors That Can Affect Your Term Insurance Premium – Credihealth Blog