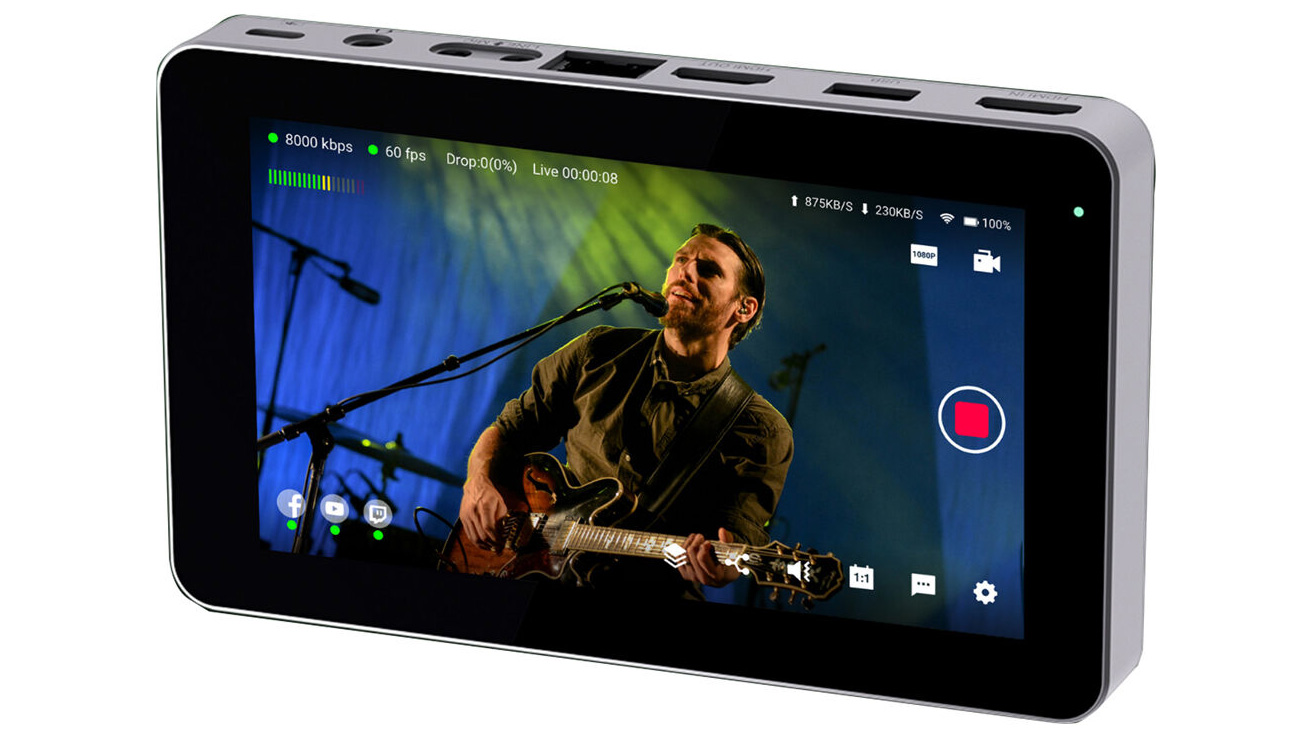 YoloLiv has today announced its new YoloBox Mini. Building on the success of the original YoloBox (review here) and YoloBox Pro the new YoloBox mini incorporates many of their features into a smaller package for live advanced streaming anywhere. Sure, you can live stream from anywhere with your phone, too, but the YoloBox Mini provides HDMI and USB video capture, along with dedicated audio inputs and it can even record.

The 5.5″ pocket-sized YoloBox Mini supports up to 1080p 60fps streaming and features a built-in 4G LTE sim socket for direct connection to YouTube, Facebook and other platforms without the need for WiFi. It also has a built-in battery and can operate completely independently, streaming from wherever you can get a signal without having to connect it up to a laptop or other computer.

There are, obviously, some differences between the YoloBox Mini and its larger siblings. It has a smaller 5.5″ LCD, rather than the 7″ or 8″ of the YoloBox and YoloBox Pro respectively. That smaller screen is a little brighter, though, coming in at 500 nits. The YoloBox is 350 nits and the YoloBox Pro is 400 nits. It also has fewer HDMI inputs. And by fewer, I mean it has one. It has a single lone HDMI input. But, it does have a Type-A USB socket that allows you to stream a USB video device like a webcam or a second mirrorless camera, DSLR or other HDMI source going through a capture device like the Elgato Cam Link 4K.

Extra visual sources, such as images, video clips and even PDFs can also be loaded on-demand from its built-in SD card slot, and you get a number of advanced features your phone can’t provide, such as comment overlays for streaming services like YouTube, Twitch, etc. as well as built-in green screen capabilities. It has both line and microphone level inputs for feeding it a dedicated audio signal and you can keep this audio signal constant regardless of what camera or source you switch to.

As well as WiFi and 4G LTE sim support, there’s also a built-in wired ethernet port on the YoloBox Mini, to let you eliminate the potential issues of wireless internet signals. As you can see on the image above, as well as this, the HDMI input and Type-A USB socket there’s also an HDMI output, allowing you to pass the signal along to an external monitor or daisy-chain to another capture device on a computer, the line and mic inputs as well as a headphone output and a Type-C USB socket for charging the internal battery – or keeping it powered during longer streams where the battery alone won’t be enough.

For streamers, you get the ability to stream to multiple platforms simultaneously, and overlay the comments you get from all of those platforms during your stream onto the feed itself. A very handy feature to help highlight some of your audience engagement that’s a pain to set up in more traditional computer-based streaming solutions like OBS. You can also add logos, watermarks, lower thirds, scoreboards (handy for those sports streamers), rolling captions and countdown timers.

The display is, of course, a touchscreen, eliminating the need for any kind of remote control smartphone app or an array of confusing buttons. This is a fantastic solution on a device like this, which gives them complete freedom to implement new features in firmware updates without having to rely on a physical button interface or keeping it updated in tandem with a smartphone app for two different mobile platforms.

And if you don’t want to stream with it, you can also use it as a regular on-camera monitor, too. Except, this isn’t just a monitor. It records, too. It only accepts SD cards up to 128GB, but you are limited to 1080p at 60fps – even if your camera outputs 4K – so you’re still going to be able to fit plenty onto that card. Because it’s 1080p, you don’t need super-fast expensive UHS-II cards, either. You’ll be able to keep going just fine with a regular SanDisk Extreme Pro. It would be nice to see larger cards supported in the future, though.

Because the YoloBox Mini accepts a normal HDMI source as its input, you can also use this to stream from another video switching device like the Blackmagic Atem Mini series or Feelworld L1 (review here) or L2. Or, even if you’re streaming from a device like that into your laptop through OBS, you can use the YoloBox Mini to record the stream separately from your computer to reduce some of the load – handy if your streaming computer is a little underpowered.

Overall, the YoloBox Mini seems a pretty interesting looking device. Even if it’s not quite as capable as its larger and more expensive siblings, it still offers a lot of potential functionality and versatility for streamers, filmmakers and YouTubers. And even if you’re not streaming with it, being able to plug in multiple cameras to a switching device like the Atem Mini or Feelworld L1, have all your overlays and lower thirds at your fingertips and record in a single device means you don’t need to deal with syncing up multiple camera streams in post in the edit. That alone may be worth the price of entry for some content creators!

The YoloBox Mini is available to pre-order now for $699 and starts shipping soon.

The Best Disposable Cameras to Get the Beautiful Lo-Fi Look!