Wildermyth impressions – a procedural RPG that demands ‘one more turn’


Losing sleep to weave the legacy of generations

Wildermyth can be a tough game to describe. It has a number of systems, all interlocking and affecting one another on various degrees. It’s got enough familiarity to its tactical combat and strategy meta-layer that it might be easier to fall back on the “X by way of Y” method of game description.

It is an RPG, at its core. It takes some clear inspiration from tabletop role-playing games, except—at least in single-player mode—you play the whole party. Just as other games have used them to create their own narratives, Wildermyth uses procedural systems to tell its story, generating different paths from the hooks your characters have, either by choice or through randomization. You start out with an idealistic band of adventurers, hoping to make their mark on the world, and maybe save it in the process.

And then party members journey, bond, and build. They fail, fall in battle, and the years take their toll. Generations rise and fall. Time has to be managed, and battles take place on a field familiar to anyone who’s spent some time with XCOM, only with fantasy weapons and monsters. The story feeds into the battles, and those battles feed back into the story, in ways that hooked me in and kept me playing until I declared aloud (on Twitter) “oh shit it’s 3 a.m.” [sic]

It might be easiest for me to explain the appeal of Wildermyth through an anecdote. In my first campaign, my band of merry adventurers had tracked down the source of a Gorgon infestation, led by a genuine, in the blue-flesh Gorgon. We faced off in a barn, in a town turned silent by the Gorgon’s stone gaze, and fell the beast alongside its many minions.

Then, at the last second, it grabbed one of my Warriors, Baladvia. She was a new addition to the company: bright-eyed, ambitious, and eager to prove herself. She was the headstrong counterpart to my other Warrior, Anwell, and the two developed a chemistry as the hot-and-cold, sword-and-shield of my frontline through several battles.

So when Baladvia was reeled in by the Gorgon, to be used as a mouthpiece for some vague threat of a coming doom for the human race before having half her face turned to stone, I panicked. She was new to the party, and not as endeared to me as Anwell, my half-wolf Hunter Junythien, or my elemental Mystic Ullis, but she was part of my company, The Swan Order. She might die on my watch.

Baladvia physically recovered, as the rest of the squad sprung into action to save her. But in her heart, there was now a deep-seated thirst for revenge. She had seen the coming danger, and had been subject to it herself. As the others settled into relaxing pasttimes and wistful new ventures in the years of peace the Gorgon’s demise earned us, Baladvia knew there was more on the horizon. 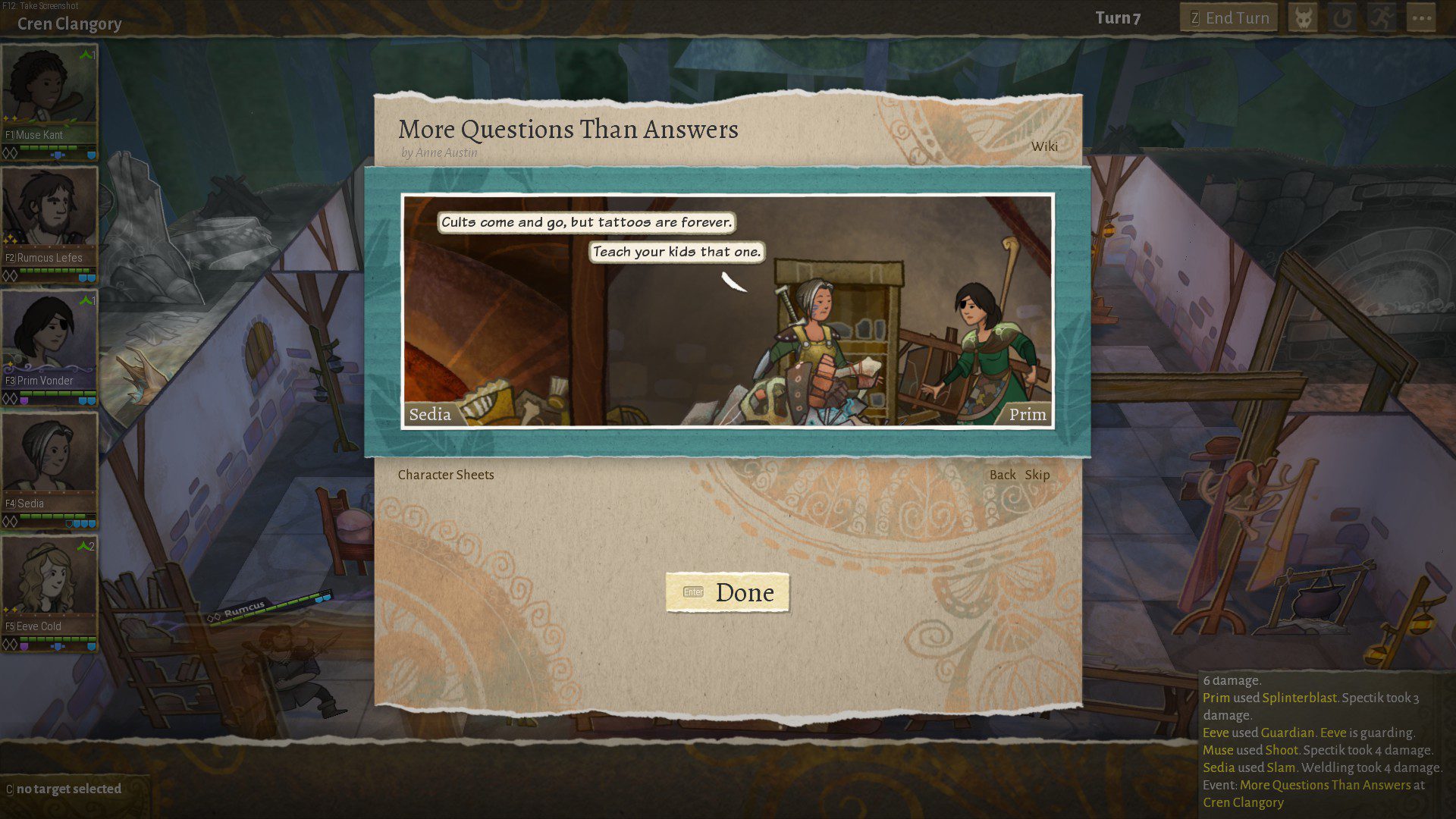 Wildermyth is a veritable factory for these kinds of stories. I have dozens, scribbled in my notebook and recorded in screenshots, across just the handful of hours I’ve spent with it so far. It’s an RPG from a small studio, Worldwalker Games, that’s been toiling away in Early Access for a few years. But with its launch this year, Wildermyth has a number of pre-installed campaigns, a lot of cool features, and understandably a number of critics praising it.

I’m still what I’d call very early on; I’ve played the “beginner” campaign, Age of Ulstryx, which is three chapters long and chronicles the battle against the Gorgon forces. Now, I’m working my way through the back-half of The Enduring War, one of four longer campaigns included with Wildermyth.

Already, I’m starting to see the long-term draw. The stories are fantastic, and they’re generated in a way that feels mostly natural. (I have had one event make a repeat appearance between campaigns so far.) The way characters can be customized and modified to be their own person is a little astounding; sure, you can uncover some of that if you go digging into the gears a bit, but there are enough hooks and variables present to keep presenting new, interesting stories. 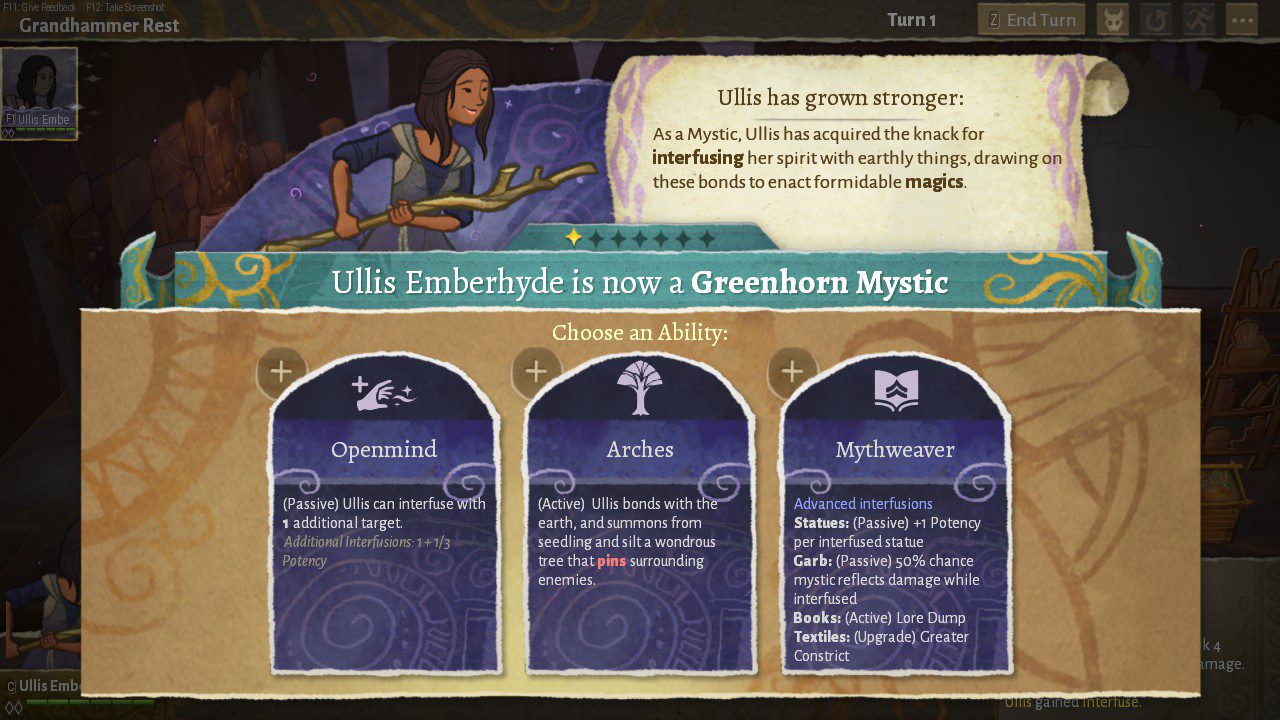 I expected Rumcus to be a boneheaded Warrior, but instead he became the charismatic leader of my group. Eeve started out brash and bold, with a penchant for instigating chaos without considering consequences; this carried over into her leaping into battles, literally, and eventually sustaining an injury that brought her adventuring years to an early end. She mentored the child of another party member though, and that Hunter has grown to become the young star of my squad as the years have toiled on.

In combat, this is evidenced by the way my characters’ playstyles shift over time. Mystics, Wildermyth‘s mages, enchant the scenery and rip it to shreds as fuel for their spells. But one of my Mystics prefers a direct approach, using magic to enhance her abilities and provide cover while she snipes from afar. A Warrior can become a deft bow-wielder too, and a Hunter can become a hardy melee combatant.

When characters fall in Wildermyth, they gain character, allowing you an opportunity to have them escape death and gain a scar. Sometimes characters might discover they’re descended from a lineage of wolves, become privy to the divine secrets of the universe, or learn to wield fire. Maybe they just find a cool new companion to join them, like a tiny pet. 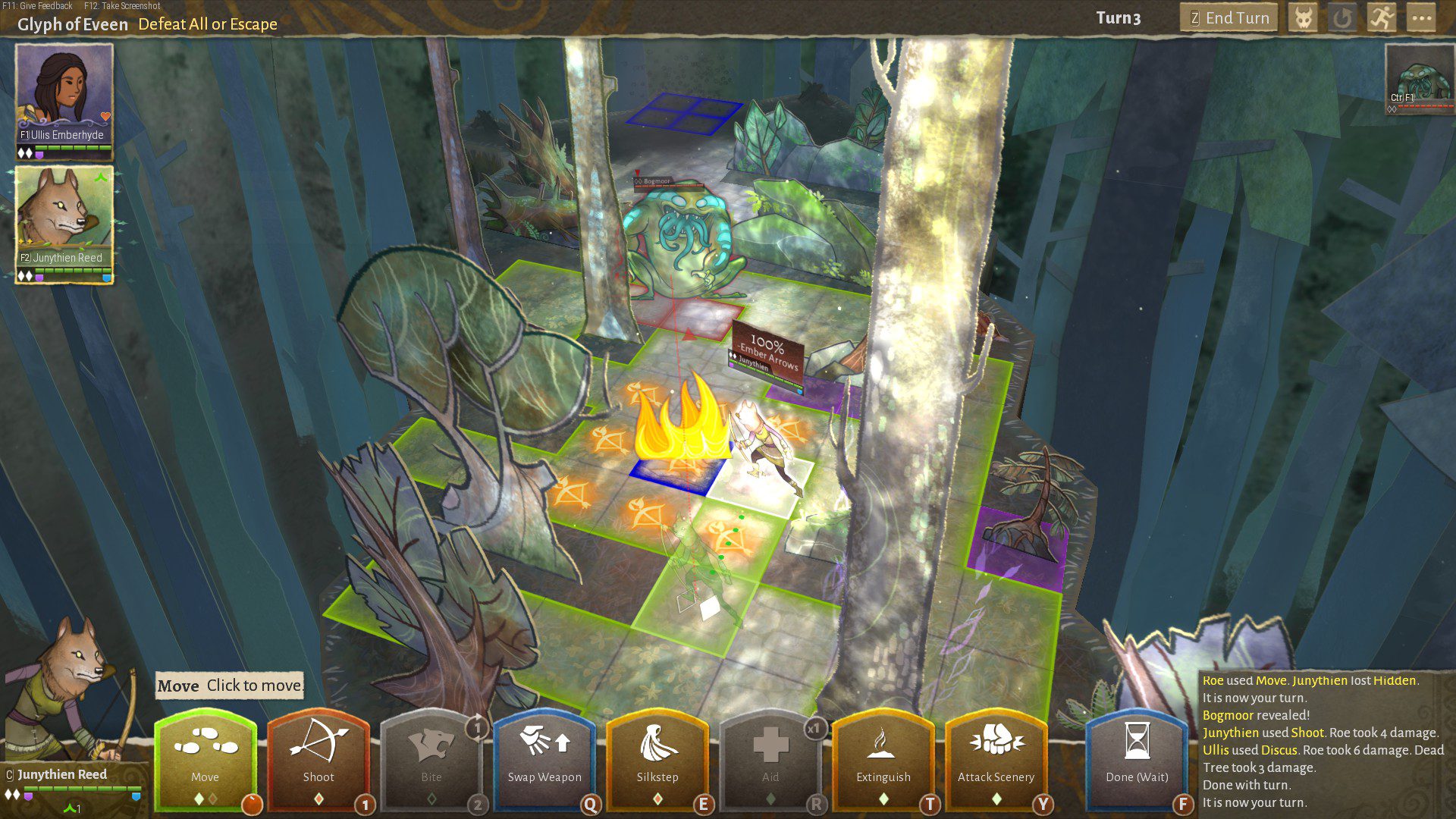 Everything in Wildermyth is a story. It all interconnects in a way that has made it, frankly, really difficult to put down. It has the one-more-turn feeling down, and what’s more is it tells the stories I’m usually imagining in my head as I play a similar long-running tactical RPG like XCOM. It’s not just life or death here, but generations of warriors and wizards, fighting against escalating calamities, always short on time and one bad turn away from doom.

I’m interested to see whether it can maintain its pace across every campaign, and whether more repetitions will start to show up over time. But as a foundation with some potential in future Steam Workshop support, Wildermyth is fueling my metanarrative needs and weaving tales that have hooked me in for likely days to come. I’ve got at least a few more late nights ahead, and I have only Wildermyth to blame.

Which is the Year’s Best Power Station?

Needle in a Timestack review: A time-travel romance about messy men