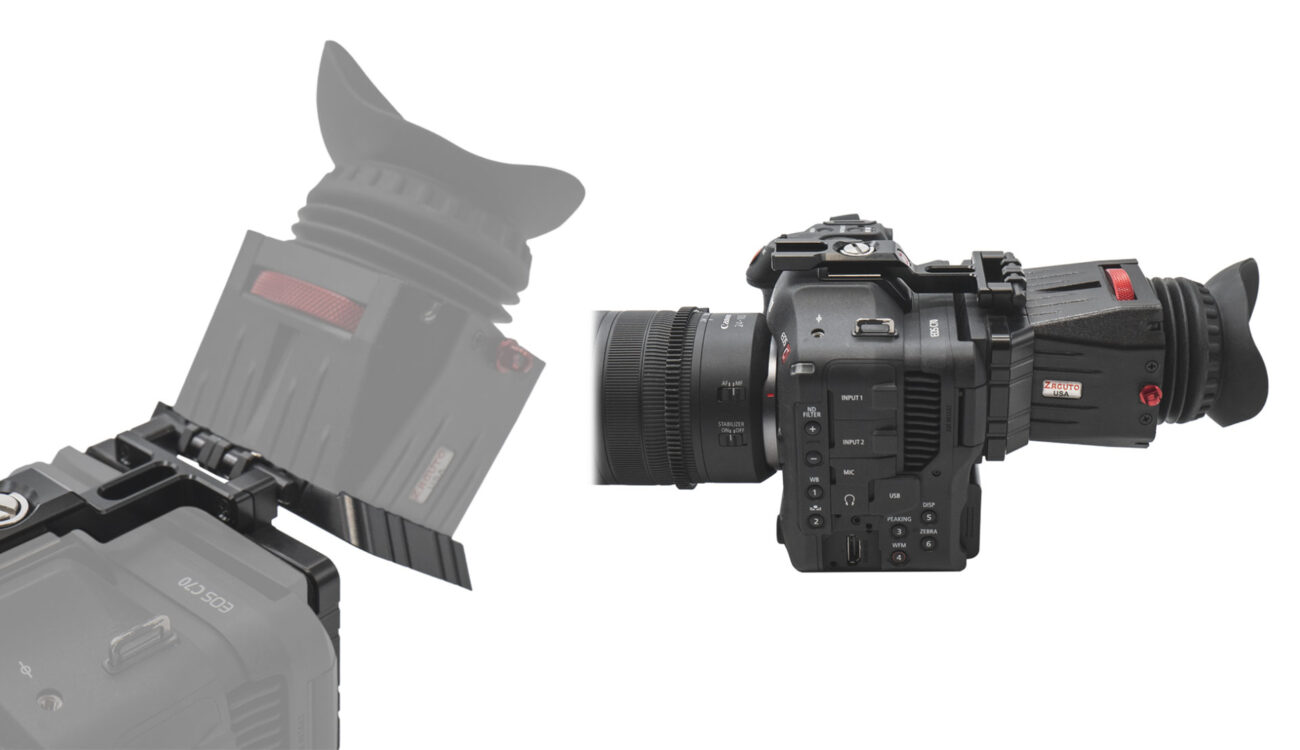 If you’re looking for a minimalistic Canon EOS C70 setup without any cage around your camera, Zacuto recently released a new Coldshoe Z-Finder. This 2.5x loupe attachment allows you to see what you’re shooting in bright daylight conditions without the need for an external EVF. So let’s take a closer look at it!

The Canon EOS C70, which was announced in September 2020, has been an enormous success. So many filmmakers – including myself – switched to this very compact little beast that is a pleasure to shoot with and has excellent features. Indeed, the Canon EOS C70 features built-in ND filters, two Mini-XLR audio inputs, it can record internally onto SD cards in 4K120P 4:2:2 10-bit, and the list goes on.

US third-party accessories manufacturer Zacuto is well-known for making high-quality camera rigging solutions. At the end of 2020, the company already launched a full cage and Z-Finder attachment for the Canon C70.

Indeed, one of the main drawbacks of the C70 is that it doesn’t have any EVF. Also, the camera’s built-in LCD is not very bright. In short, shooting outside in sunny conditions is nearly impossible as you can’t see your image on the camera’s screen.

If you don’t want to attach and power an external EVF to your camera, Zacuto recently launched the Zacuto Canon EOS C70 Coldshoe Z-Finder that mounts directly, as its name suggests, to your camera’s coldshoe. It means that you don’t need a cage around your camera, which is ideal for keeping the C70’s form factor as compact as possible.

The Zacuto Canon EOS C70 Coldshoe Z-Finder consists of a 2.5x Z-Finder and a frame. The frame attaches to the camera’s top coldshoe via a 1/4″-20 screw. As you can tell, this Z-Finder only works when the camera’s LCD is flipped against the camera body.

Back in the DSLR era, this kind of Z-Finder loupe attachment was trendy, and it works very well to magnify the camera’s LCD. The main advantages of the Canon EOS C70 Coldshoe Z-Finder are that it doesn’t require a camera cage, it doesn’t require extra cables/external power, and it is quick to take on/off.

Also, on top of the Z-Finder frame, you’ll find an extra cold as well as a Z-Rail/NATO rail, so you can still mount accessories to your Canon C70.

What do you think about this new Coldshoe Z-Finder for the Canon EOS C70? What EVF/monitoring solutions are you using with the C70? Don’t hesitate to let us know in the comments down below!

717-gigapixel image of Rembrandt's 'The Night Watch' is the largest to ever be published: Digital Photography Review

Profoto Launches Magnetic Octa Softbox for A and C-Series Strobes